Scheherazade: heroine for our times? 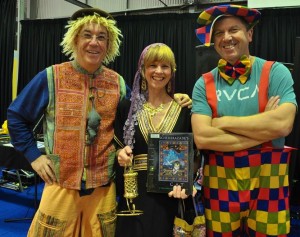 Musician extraordinaire Linsey Pollack as The Pied Piper (see the rat!), me as Scheherazade (of ‘1001 Arabian Nights’) and Martin Chatterton, prolific author and illustrator, as a clown at the Book Parade at Belmont State School’s fabulous ‘Literature Week’.

Scheherazade was the extremely heroic, intelligent and learned storyteller of the frame story of ‘1001 Arabian Nights’. Here is my very brief summary of the story. When I tell it is very different and longer but I haven’t yet written that down as it is still evolving. For a long and eloquent version I recommend Teeya Blatt’s version in the guest post that was added after this one.

After discovering his Queen cheating on him, King Sharyr murdered his wife and her lover. He then told himself the bitter story that all women were evil and deceitful, and so justified his own barbarous response. He commanded his Vizier to bring him a new wife each night, but would have the poor young woman beheaded the following morning.

The Vizier’s had two daughters. The eldest was Scheherazade and she was very learned and well read. She bravely volunteered to marry the King, despite her father begging her not to. Each night the new Queen spun for her husband a tale so compelling and sumptuous, that he would abstain from ordering her execution so that he could hear another tale the following evening. At the end of the 1001 nights, or three years, her story magic had healed the King’s sick story and thus healed his soul. Thus not only did Scheherazade redeem the King, but the Kingdom also! In effect, she healed the King’s sick and hateful story about women and taught him to be a more compassionate, wise and reasonable person.

King Sharyr’s monstrous greed for consuming and senselessly discarding virginal women seems a fitting analogy for the way the developed world (and increasingly the developing world) are treating Gaia and her resources. The frame story also speaks to the need to honour feminine divine wisdom, for a much needed change of paradigm. 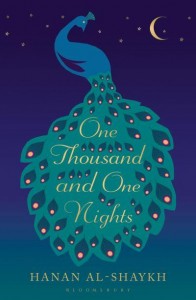 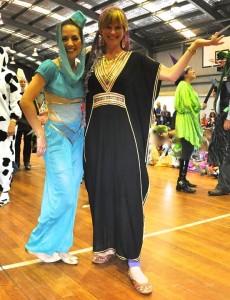 This lovely Prep teacher at Belmont Public dressed as a genie, so I HAD to get a photo with her as my character was also Arabian!

Today I found a new edition of the tales written by Hanan Al-Shaykh, an  acclaimed Lebanese author. I am off to bed to read them right NOW!!

(To read my friend Teeya’s fantastic rendition of the tale go to my next blog post.)

(PS. I never did get time to read that book before giving it to Teeya for her birthday, but I plan to buy my own eventually. Here is a review and an interview with the author by Joe Fassler. )