Each year I repost this sweet Christmas tale, which has no mention of Santa, but a focus on trees and forests, connection to earth. You can also listen to my retelling via Soundcloud. I hope you retell to the young ones in your life, perhaps under your Christmas tree or any beloved tree outdoors! 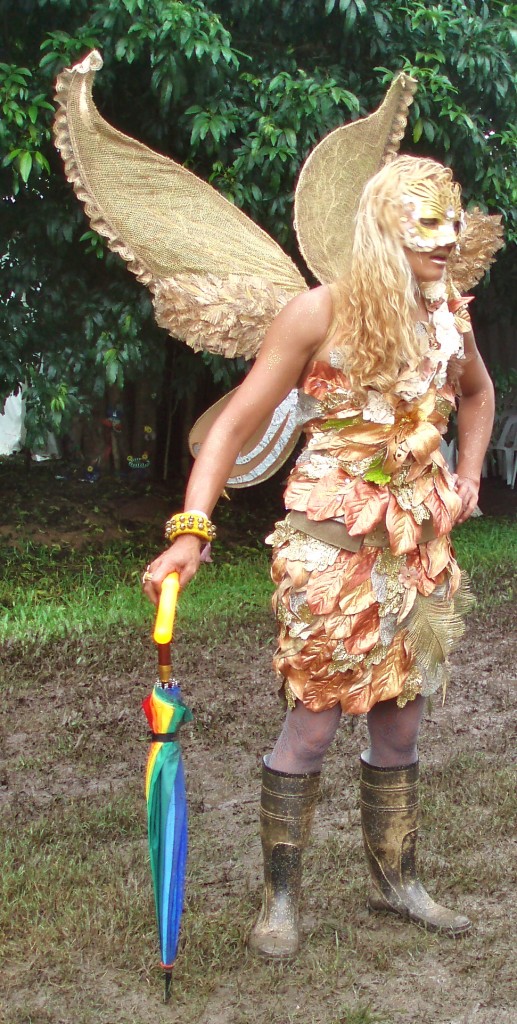 Have you ever wondered, why those of us who celebrate Christmas, bring a tree inside our homes, wind silver tinsel around the tree and add a fairy at the very top?

It was a mystery to me until I met a woman called Morgan in Sydney, who kindly told me this story and encouraged me to share it. She said it had been passed down by word of mouth for many generations.

Long ago in the lands we now call Europe, before Santa Claus and even before baby Jesus, no-one celebrated Christmas yet. What people did celebrate was Mid-Winter’s Eve. Children got especially excited because they might meet the Queen of the Fairy- and even have a wish granted! Back in those olden days, there were many great forests and only a few human tribes. Deep in those forests lived the fairies who got their name- not because they had fair skin from living in the deep, shady forests, but because they were fair of heart and fair of mind. So the Gods and Goddesses had given them the gift of the knowledge of magic. Now fairies love eating, dressing up, singing and dancing. Every six weeks, as the seasons changed and at each mid-season, they would have a big party and the party for Mid-Winter was the biggest of all.

As you may have noticed, in Winter the days get shorter and the nights get longer. Mid-Winter’s Eve is the longest night of the year and after it, the nights get gradually shorter and the days get longer. Now the fairies, at least most of them, quite liked children because they are playful and funny.  So they would invite all the children of all the human clans and tribes to their mid-Winters Ball in the middle of the forest. The children dressed in their warmest clothes and thought a lot about the wish they would make.  This sometimes caused a lot of sighing, jiggling and twiddling of hair.

The Queen of the Fairies knew that human children would get lost in the dark or trip over tangled roots and vines. So she asked the spiders to weave their webs from the outside of the forest into the center, where the Queen sat on her magnificent, carved wooden throne. Then with a graceful wave of her wand, she would turn the webs into threads of silver that sparkled under moonlight and starlight.

This was the signal for the children waiting at the edge of the forest with their parents, to make their way in. The older children helped the younger children. Then they made a queue to meet the Queen. Some children took little hand-made presents for the Queen they had made by hand during the long, dark Winter nights. As each child made it to the throne, they would whisper a wish in the ear of the fairy. If she thought it was a good and kind wish, she would use her magic to help it come true.

The children were invited to stay for the party. The fairies would light a big bonfire. They put on a feast of delectable treats- pastries and cakes and sweet ambrosia drinks. After everyone had eaten, the musicians began and it was the kind of music that makes your heart sing. The children joined in when the dance music started. When at last it was time for the children to go home, the fairies would wave them goodbye. As the parents and other adults waited at the edge of the forest, they watched the flickering golden torches as the children made their way back out along the silvery webs. They were remembering what it had been like back when they were children and they had gone to the fairies party.
So that is why we bring a tree into our houses. Some part of us remembers those marvelous Mid-Winter Balls. We bring a tree inside to represent the forest, wrap silver or gold tinsel around the tree to remind us of the silver spiders’ webs, flashing lights to remind us of the flickering golden torches, presents under the tree to remind us of the gifts of the fairy and a fairy on the top to remind us of the Queen of the fairies. Nowadays there are grown-ups who like to party and dance the night away in forests. They wear their hair in bright colours or dreadlocks and sometimes wear fairy wings.

So when you put your tree out this year ready for mid-Winter -or mid-Summer here in the southern part of the Earth, remember to put a little food and drink for the fairy, make a wish and remember to be fair of heart and fair of mind. Then if the fairy likes your wish, it just might be granted!

NB:  Feel free to read or tell it to your family- or create YOUR own version and let me know. Folktales are dynamic and grow better with each retelling. Write a comment here or share your ideas on my FB storytree page. Happy Solstice!

Here are two other delightful Christmas traditions friends told me about. (In my house we do both bought presents and one of these.)
Gratitude Trees- write all that you feel grateful for, put them in an envelope and attach to the tree.
Pledge Tree- write a pledge to do something you wouldn’t ordinarily do that the recipient would enjoy.
eg ‘I pledge to give you a massage this year. / …cook your favourite lasagne/  …walk on the beach with you this year/ play ping-pong….’
I wish you a very beautiful day of connection and good company!!
Images: greenlady_blankismet- photobucket, Fantasy forest and throne mega11 dreamstime, fairylove.com, greengrass woman chelsea flower show, soulseasons-yiota143.blogspot