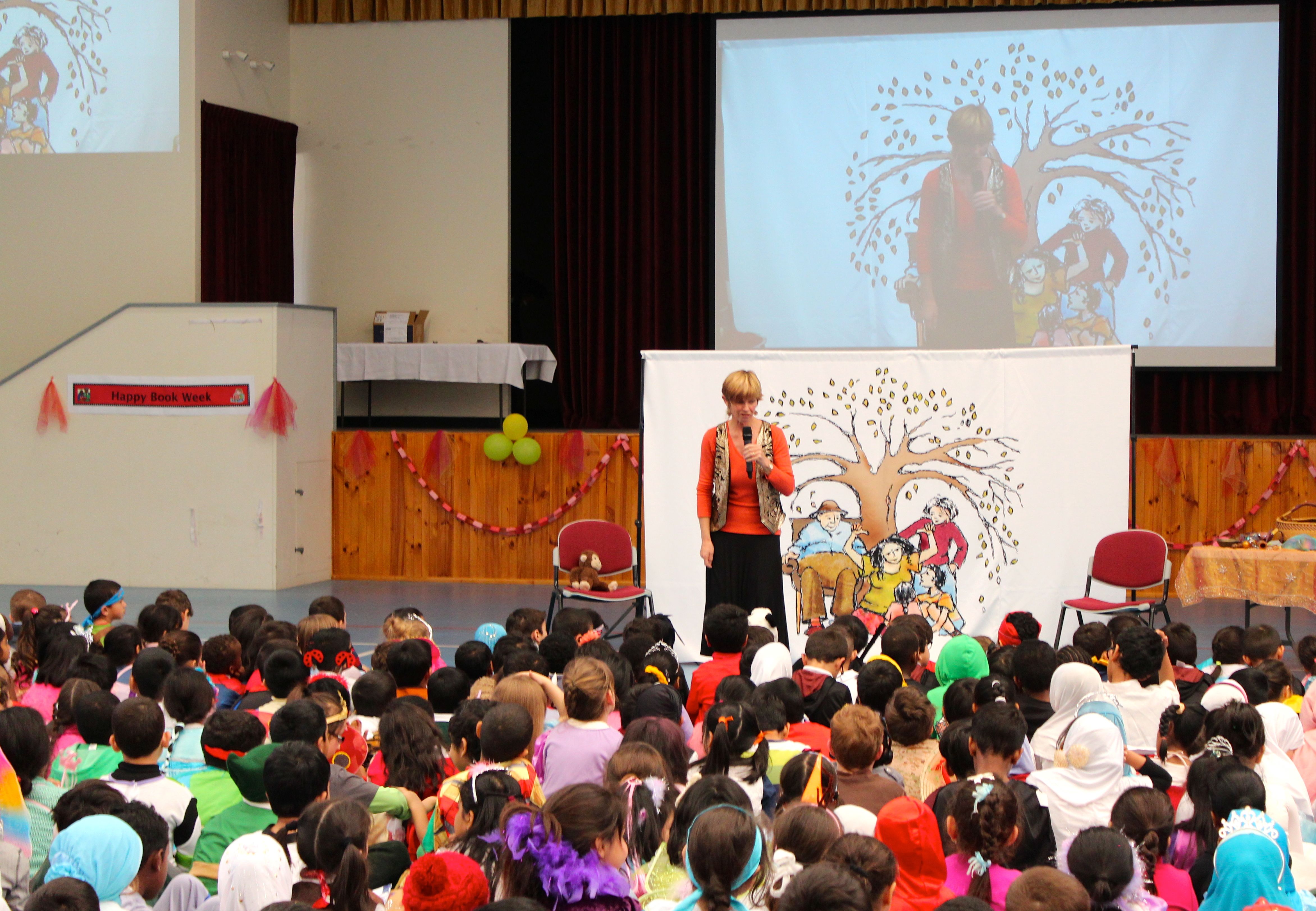 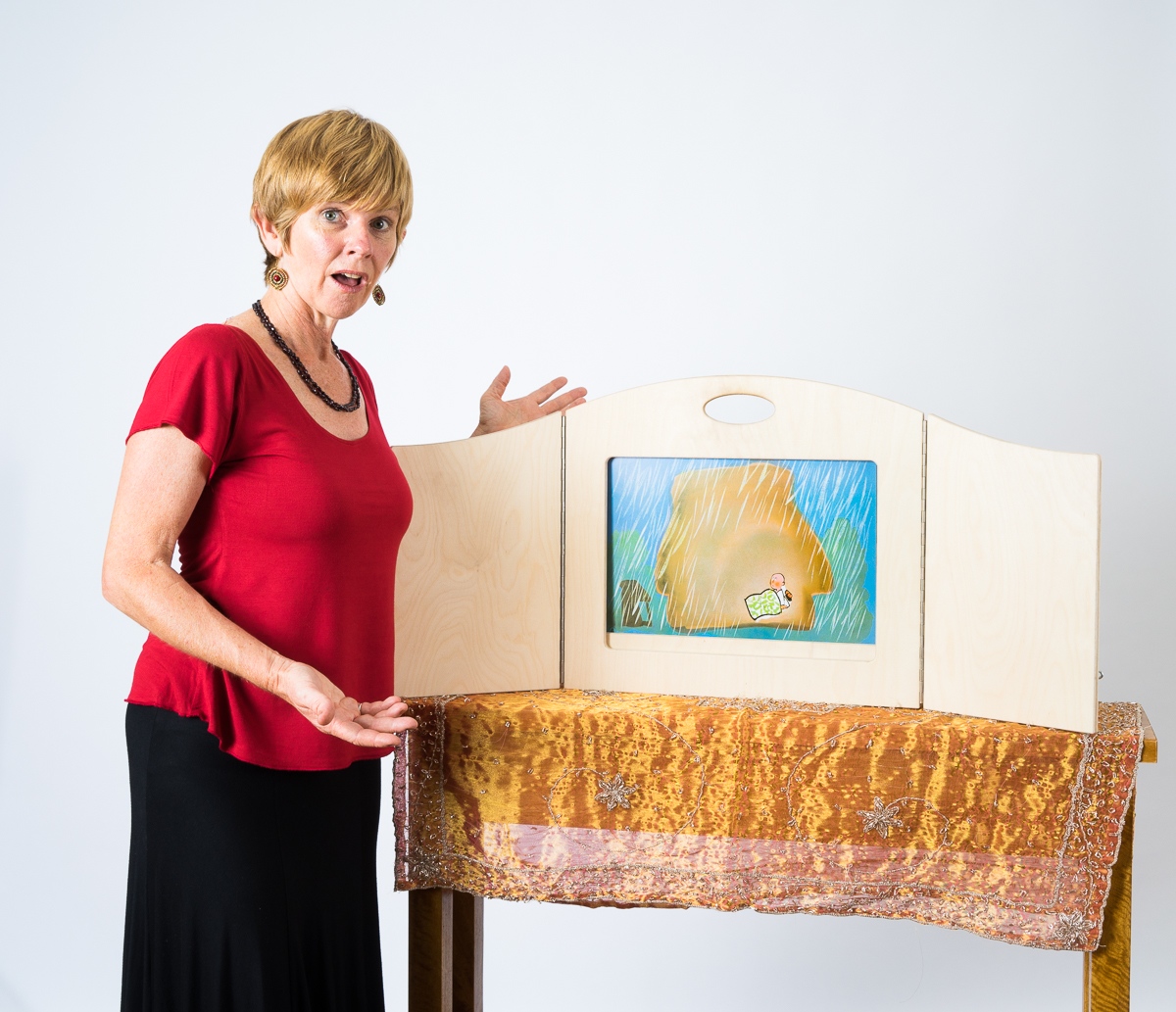 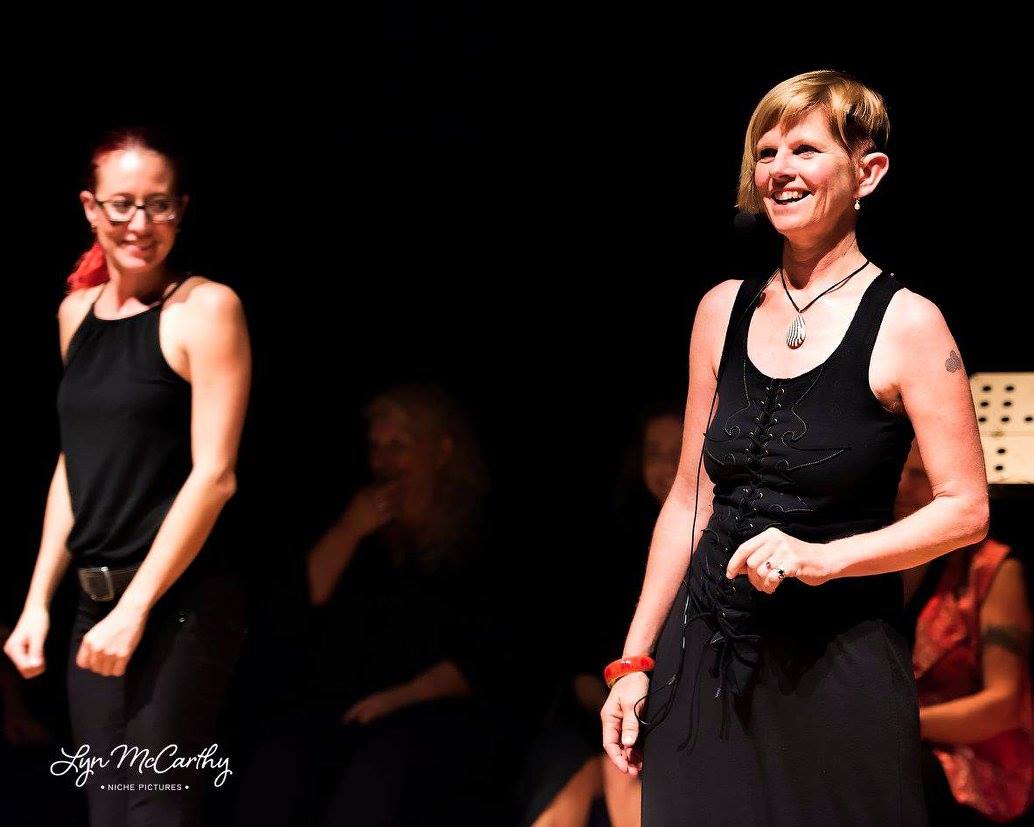 For school bookings in the Gold Coast and Brisbane areas, contact Speakers Ink. For all other enquiries regrading performances in the Northern Rivers area, contact Jenni directly. She is currently based in Ballina, south of Byron Bay. 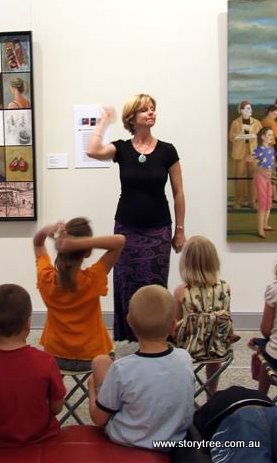 Here are some of the stories Jenni tells for preschoolers:

‘The Blue Coat’ A touching Jewish folktale and circle story designed for maximum participation. An endearing story about family, perseverance and recycling. From the album ‘Reaching for the Moon’. Watch a video of Jenni telling it here.

‘Two Russian Goats’ A lively, dramatic story for acting out with two child actors as goats about co-operation and kindness. From the album ‘The Mermaid’s Shoes. Listen here.

‘Never Give up’ about a very persistent frog. Theme: persistence. From the album ‘Reaching for the Moon’. Listen here.

‘Gowondo’ a Kombumerri Aboriginal creation story from Burleigh Heads, which explains how people used to work with dolphins to catch fish and inspires respect for wildlife and generosity. Listen here.

‘Shelley and Rustle’ I tell a simplified shortened version for preschoolers of my original story about Shelley the turtle and Rustle the plastic bag and why we need to keep plastic OUT of the ocean. Themes: recycling, reduce plastics use and care for the ocean, turtles and sea creatures. From the album “The Story Tree and other nature tales”. Listen to longer original here. Watch Jenni tell the tale to Year 2 students here.

‘Froko and Lettuce’ The simple true story of the frogs who came to live at Jenni’s house. Inspires care for wildlife. Listen here.

‘Rat’ A story told with the hypnotic and evocative sounds of the zyladrum. Rat wants to become anything but a rat, yet by the end of many transformations, being a rat looks better and better. A Chinese folktale with themes of contentment and self-acceptance. Listen here.

‘Tanabato Soma’ Children love to hear the story and sing the poignant song from the Star Festival of Japan. Two children play bells and all the children join in with hand actions. From the album “Molly Whuppie and other wonder tales’. Listen

‘Caps for Sale’ An amusing story about an Indian hat seller has all her hats stolen by a band of monkeys. She yells and threatens them, but that doesn’t work. When finally she gets her hats back, she comes to understand the saying, “Monkey see, monkey do”. Not recorded.

To BOOK or enquire about rates for shows outside Ballina Shire or Byron Shire,

“Jenni’s stories came straight from the heart and filled the air with magic and wonder. Her use of simple props, percussion instruments and active participation of children, interspersed with her beautiful singing voice enabled her performance to be received by all the 3-6 year olds in the group.” Mari Mathieson, Co-Director, Federal Community Preschool 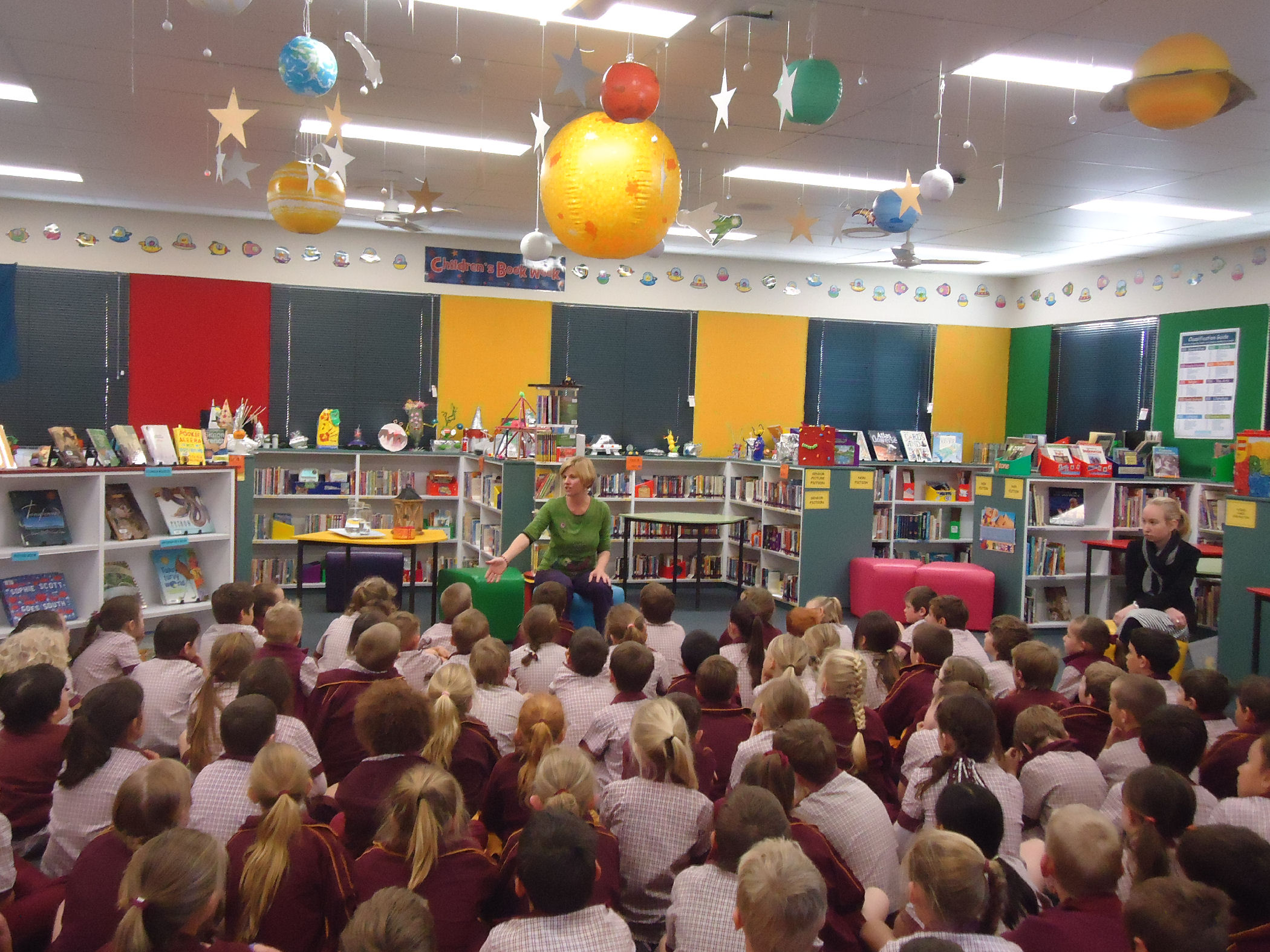 Jenni’s performances in schools have been widely acclaimed by teachers and children alike. She draws upon her diverse story repertoire and adjusts her program according to the age of the group and their mood and interests. You can watch video’s of Jenni telling tales in schools at her YouTube channel here. Her rates are based on the Australian Society of Authors.

Videos and recordings of a sample of school show stories After 20 years of telling stories professionally, Jenni has a repertoire far larger than listed here. If you want her to tell stories pertaining to a theme your students are working on, chances are she will have a story to fit. As Jenni also LOVES a story challenge, given enough time, she can also learn new stories on a theme. Some stories work best for lower primary, some for upper primary and others can be adapted for all ages.

Molly Whuppie is a perennial favourite- a Scottish trickster tale of a girl who repeatedly outwits a giant, replete with loads of vocal sound effects to join in with! For more brave-hearted preschoolers. Listen here.

The Mulberry Tree: When I was born my Dad planted a mulberry tree and as I grew, it grew. By the time I was old enough to climb into it, it was strong enough to take my weight…Watch video of Mulberry Tree OR Listen to recording. Original.

The Mermaid’s Shoes: One full moon night, the mermaid of Byron Bay hears funky drum rhythms on the beach. She sees dancers twirling and leaping by a beach fire. She is so inspired that she swaps her mermaid’s tail for human legs so that she can become a dancer. The mermaid’s shoes hold a magic that allows her to transform under the full moon. But will the sea call her back? Listen to recording. Original. 11 mins.

The Fisherman’s Baby: A freak storm separates a baby from his young father. But will a seal help? Irish tale. Version by Irish storyteller, Liz Weir. Listen to recording. 8 min 25.

When my brother and sister nearly burned down the house: family tales: I demonstrate how to use baboushka dolls as a story prompt for family stories. This can inspire children to research, craft and retell family stories of their own. Jenni tells a story about her great-grandmother Emily Jane and then the tale of the time her brother and sister nearly burnt the house down! Watch video. Rustle and Shelley: Once upon a time, there was a handful of little plastic pellets called Rustle. All Rustle longed for was to be useful. One day, he got a job- as a plastic shopping bag…. What happens when Shelley the Leatherback turtle meets Rustle the plastic bag in the ocean? Listen to recording or watch the video of Shelley and Rustle.

Tanabato Soma: Children love to hear the story and sing the poignant song from the Star Festival of Japan. Two children play bells and all the children join in with hand actions. From the album “Molly Whuppie and other wonder tales’. Listen here.  Two Russian Goats A lively, dramatic story for acting out with two child actors as goats about co-operation and kindness. From the album ‘The Mermaid’s Shoes. Listen here.

Never Give up about a very persistent frog. Theme: persistence. From the album ‘Reaching for the Moon’. Listen here.

Gowondo A Kombumerri Aboriginal creation story from Burleigh Heads, which explains how people used to work with dolphins to catch fish and inspires respect for wildlife and generosity. Listen here.

Jenni’s oral storytelling performance, featuring original and ancestral wisdom tales and fables from around the world covers the following aspects of the Australian curriculum.

For school bookings in the Gold Coast and Brisbane areas, contact Speakers Ink.

She is currently based in Ballina, south of Byron Bay. For schools in Byron Shire or Ballina Shire, text or call Jenni on 0403 328 643,

or email her on jenni@storytree.com.au for more information.

Thankyou Jenni for all your wonderful stories. The children have been passionately inspired. The expressions on their faces tell of exotic locations and incredible journeys. Many will retell these stories to their families. Cheers and all the very best for the future.

Jenni was great with the children – very interactive. She was also a wonderful person to host at our school. I received lots of positive feedback from staff & students.

A very big thank you for organising a wonderful speaker, Jenni Cargill. Our students and teachers were enthralled. Her props and ability to keep her audience entertained was amazing. I would recommend Jenni to other schools.

Jenni has an empathy for her audience adjusting to meet their needs. She presents beautifully crafted and told stories to suit the needs of the students and the curriculum on request perfectly. Her skills as a storyteller are amazing, our students were entirely absorbed. 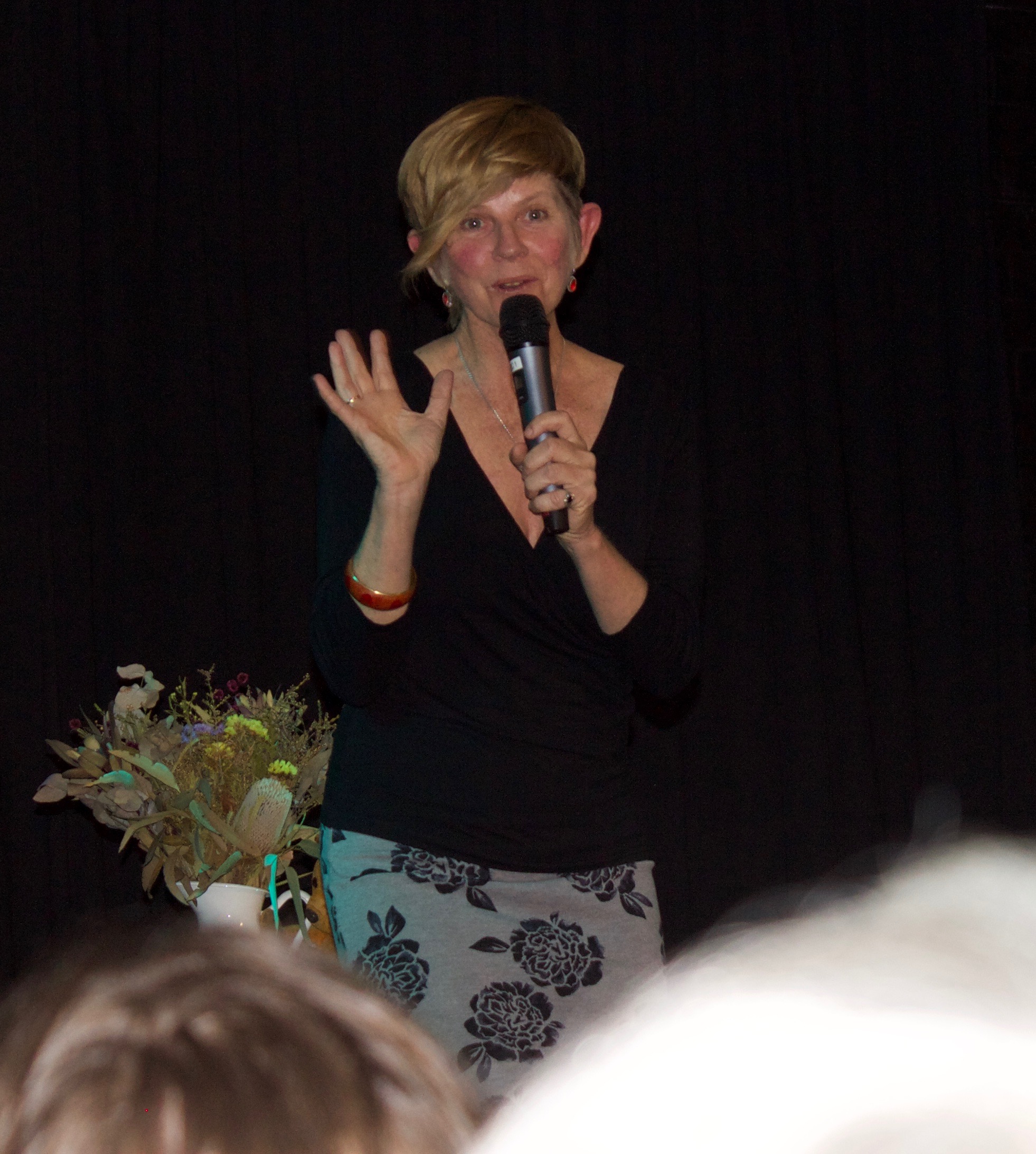 Thanks so much for your wonderful contribution the other night. You had the audience enthralled. You never skip a beat. Well done.

“I loved Jenni Cargill’s performance of Inanna’s story. It was rich and funny and tragic and wonderfully vivid. In moments I felt as if I’d been magically drawn into the heart of an ancient rite, as if the goddess herself was speaking.”