When stories are bread for a thousand

Though this article is a reworking of the blog post below it,  I have posted it here due to popular request. It has enjoyed some good editing, thanks to American environmental storyteller Pete Griffin and the editors at theNational Storytelling Network (NSN) magazine. NSN is the  peak storytelling body in America, and they published this article in the last issue of  ‘Storytelling Magazine’ Aug/Sep 2016.

Environmentalists often assume that to motivate people to make environmental choices, they just need to be provided with more scientific information.  This assumes the problem is one of ‘information deficit’. (1)   In the Information Age, however, we suffer the opposite: information overload.  Most of us know the facts all too well, but may lack emotional engagement with that information.  English poet, David Whyte describes this in his poem, ‘Loaves and Fishes’.

Forget the news, and the radio, and the blurred screen.

This is the time of loaves and fishes.

People are hungry and one good word 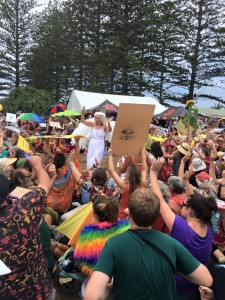 Storytellers regularly experience how a well crafted tale can be ‘bread for a thousand,’ but how do we use our tales to amplify an environmental message and furthermore foster environmental understanding and behavior?

Last year, I did a two-day training with corporate trainer and change agent, Margot Cairnes.  Margot explained the strategic importance of persuading independent thinkers (also called cultural creatives). They represent about 25 percent of the population.  Independent thinkers weigh evidence.  Even if their conclusions are opposite to the status quo, they are capable of changing their minds and changing their behaviour.  This is enhanced when they become emotionally engaged.  Once a critical mass of independent thinkers take on an idea, the rest of society will follow, sooner or later.  This shift can be swift and dramatic.  Naomi Klein, in her book “This Changes Everything,” documented an ‘effervescence of rebellion’ arising on a global scale in response to climate change. (3)   The grassroots actions of thousands of independent thinkers at the Paris Climate Summit had a powerful effect on the outcome.  We must first target independent thinkers and work to get that critical mass.

Next, consider whether we need a big “S” story or a little “s” story.  Shawn Callahan co-founded  Anecdote, is a world leader in business storytelling, and recently published “Putting Stories to Work.”  Shawn says, “to change a culture, you need to change the stories told.”  In a corporate setting, however, Shawn says we will have much more success with little “s” storytelling.  By this he means short, informal anecdotes, told naturally without fanfare, rather than big “S” stories which are grand, dramatic narratives. (4)  This is in alignment with what Steve Denning teaches.(5)

I agree with Shawn in that little “s” stories are best in a business setting.  But I argue that in non-corporate settings, it is possible to use big “S” storytelling for environmental messaging with adults as well as kids.  My mentor, United States biologist and environmental storyteller Fran Stallings, teaches environmental educators ways to repurpose simple, short folk tales to communicate scientific facts.  Fran uses a strategy reminiscent of Malcom Gladwell, who created a simple and effective formula: tell a story, then use it to illustrate your point.(6)  Fran often uses folktales to illustrate Barry Commoners Four Laws of Ecology.

In my experience, as long as the point is clear and the story serves the message rather than overwhelming it, a little fantasy and whimsy can delight and enchant adult listeners who are generally more starved than they realize for soul food.  When I explain the ways to interpret that story to unlock relevance for modern real world situations, their delight is only deepened. 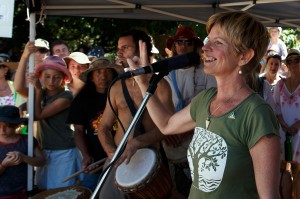 (3) Klein, N. (2014) This Changes Everything: Capitalism Versus Climate Change, (Simon and Schuster)

Jenni Cargill-Strong is an Australian storyteller with five recordings. Four received “Honors” from “Storytelling World,” and her fifth album was a “Winner.”  She teaches environmental storytelling, works as a sessional academic, and operates “Stories on Foot: Tales of Byron Bay and the Rainbow Region,” a walking tour for visitors. www.storytree.com.au