This award-winning compilation of empowering global folktales and songs will capture your child’s imagination and gently teach them a few life’s lessons along the way.  Children can join in with sound effects and sing along. The folk songs lyrics and translations are printed inside the CD cover. An eclectic range of folk instruments is featured on the album. This is a magical carpet ride in story and song through many lands which the whole family can enjoy which was recognised by the National Library of Australia with the inauguration the ‘Special Award’. 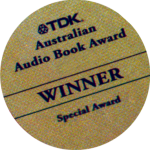 Molly Whuppie and other wonder tales

1. Molly Whuppie (Tin whistle)  In the timeless title track, the dauntless and adorable Molly outwits and outruns a fierce giant. Jenni’s retelling is replete with chants, slurps, burps and knee slaps that kids can join in with.  Scotland (13:49)

3. Gowondo  The story of a great hunter who becomes a dolphin. Kombumerri people Burleigh Heads, Australia (5:27)

5. Goldenheart (lyre)  Goldenheart finds his feelings too painful. Like Davey Jones, he throws his heart in a tin. A mermaid begs him to take it back. by J.R.Cargill ©1996  (3:53)

7. Yellow Thunder Dragon (Chinese flute, bells and xylophone) Chang meets the God of Thunder  and his four servants who gives him a magical gift.

Review by Cassy Cochrane, Child Magazine, 4 out of 5 stars

“Jenni Cargill-Strong combines song and story on this global compilation of mythological folk tales. Originally released in 1996, Cargill has re-mixed and re-released this award winning album for 2006. (Goldenheart, track 5, was voted one of the top 5 stories by America’s Storyteller Net in 2005.) But all the stories and songs here make for good listening. From Japan to Scotland, Australia to Indonesia, Jenni interactively relays tales of creatures and people.  These are empowering fables that will capture children’s imagination and teach them one or two of life’s lessons along the way.  Each of these folk tales is timed out perfectly, not too long or too short, so kids won’t lose interest or concentration, and the stories are interspersed with songs and music.
An eclectic range of folk instruments is featured on the album; the haunting tin whistle, lyre, Chinese flute, as well as banjo, ukulele and chalumeau- (a seventeenth century precursor to the clarinet.) It’s great to hear the raw acoustic sounds of these traditional instruments. The songs featured here are ‘participation songs’ encouraging children to join in with sound effects such as thigh slaps and burps, and the Japanese, Chinese and Indonesian folksongs come with lyrics and translations printed inside the CD cover, encouraging children to memorise them.
The oral tradition has its roots in all cultures, and Aboriginal dreamtime stories feature here too, along with stories from the Celtic and Asian oral traditions.  There’s something here for every Australian! These tales cover a range of themes and moods, and Jenni is an enthusiastic speaker with a delicate and passionate singing voice. Jenni’s stories are empathetic to her characters and will encourage children to think of others, and to value their families and friends. Keep an ear out- Jenni will be touring the schools this year.
The art of the bard or storyteller is very much alive and well with this sparkling collection of tales and songs.”

“Like the bright cover and the animated Jenni Cargill in person, all tracks of this CD sparkle with vitality. The eight stories and songs will hold the attention of young children very effectively. They have obviously been thoughtfully selected, arranged and presented in collaboration with musician/producer Ian Blake. The duration of tracks, the range of countries of origin, themes and moods, together with varied presentations all invite children’s strong engagement.

…every story is interspersed with a much shorter song, enticing more active participation. There are sounds to make (eg slapping thighs and burps) simple bouncy lyrics to learn in three languages  besides English (varieties of Chinese, Japanese and Indonesian- reproduced usefully on the cover for the parent/teacher) and to respond to: diverse instrumental music (8 acoustic instruments including of course the chalemeau!) and sound effects- all carefully placed and spaced. A superb addition to the range of CD’s produced by Australian storytellers.”

‘Thanks for making such lovely story cds! My daughter absolutely adores them. I will check out your newsletter and Facebook page. We found ‘Molly Whuppie’ at our local library. My daughter has been so taken by the stories and I thought what a wonderful Christmas gift to get a new one! She is starting school next year and i think they are just wonderful stories for big transition times in children’s lives. I think we have listened to the Molly Whuppie story approximately 50 times!’ –Emily Burrows, SA. ‘I recently visited the Lismore Gallery and purchased your CD, Molly Whuppie. We have enjoyed your stories so much that I have just ordered I your stories for adults CD online. Keep up the great storytelling.’ Sharon, Boston, USA. “Our kids asked if they could ‘watch Molly Whuppie’. They obviously imagine the story so vividly they feel they are watching, not just listening!” – Jacquelyn Atkins, Mullumbimby, NSW, Mother and Soundhealing therapist “We have also have had many trips made much easier with Jenni’s storytelling CD’s. And we have found that they appeal to a broad range of kids (our 4 children are 8 years apart and all 4 love the CDs!) Skye Collings, Brisbane ”I have just listened to your kids story CD’s. I really, really, really enjoyed them. Of course, your accent is special to American ears. But the tales: I particularly was touched by The Mermaid’s  Shoes (echoes of The Little  Mermaid, but happier- a delight) and Goldenheart- stunning beauty, simple (which is very, very hard) tales well told, love the sparse instrumentation that adds lots, kid voices … just a wonderfully loved and created story listening event/world/environment! More, more! Your CDs are gorgeous sparkling gems. So thank you and cheers from the other side of Equatorial Pacific. I will feature them prominently on my story radio show. Aloha, Bravo and Mahalo Nui Loa (big thanks).” Jeff Gere, Master storyteller, Director of ‘Talk Story Festival’ and host of ‘Talk Story Radio’,Hawaii, USA. (This album was first called “Wonder Tales of Earth and Sea”) “My sister in law gave my son copies of your CD “Wonder Tales” last Christmas. He listens to them non stop. We can’t wait for the new CD!” – Nick Wilson, father. “Wonder Tales” retained the interest of my son for years longer than any of his other spoken word CD’s.” – Anna Watson “I bought your CD ‘Wonder Tales of Earth and Sea’ for my kids a few years ago and they love it! Thank you. They call it ‘The Giant CD’ (Molly Whuppie is their favourite story). Your story Goldenheart combined with a story in Women Who Run With the Wolves inspired me to write one of my stories, which I have recorded.” – Tabitha Robortella “Wonder Tales of Earth and Sea is one of the best childrens’ CD’s on the market and well deserving of the ‘99 audio book award. Beautiful world music enhances accomplished storytelling. Jenni Cargill knows her audience and has selected an engaging array of stories. My (then) 3 years old’s daily ritual of listening to Molly Whuppie (Track 1) was a treat and we regularly clapped and knee-slapped in time to Long Long Long. I have bought over ten discs over the past two years as gifts for other lucky kids. It is an engaging, entertaining, high quality production.” – Kimberley Davenport. “I think Jenni Cargill is a wonderful story teller. Exciting things always happen in her stories and she has an imagination like no one else. She is a great influence on a kid’s imagination.” Lucy Serrett, (10 years old)

”When I first heard the CD of Jenni Cargill’s, with my children one night at bedtime, I was thrilled to experience the masterful choreography of each story. A visual landscape is created through the words and tone of each story and I noticed my children, and I, were hanging on each word.” – Genevieve Serrett