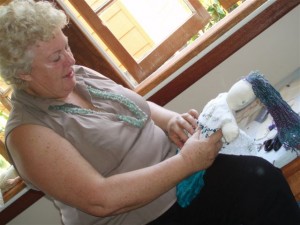 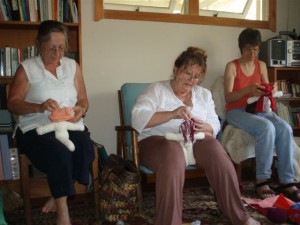 ‘Brave Vasalissa and Baba Yaga’ is a Russian and Eastern European folktale which has ancient mythic and Goddess roots. The tale was most probably a part of an ancient initiation for young women. The may have been sent into the centre of the dark forest to meet the fearsome witch, but instead they met wise but fierce crones who set them challenging tasks. If they succeeded they would be considered marriageable.

In the the Cindarella-like tale, Vasalissa relies not upon a fairy Godmother, but upon the doll her mother gave her before she died. This doll guides her and represents feminine intuition. (If you haven’t already, do take a look at the Grimm’s version of Cindarella- which is far richer than the Disney version!)
Many years ago a wonderful Australian storyteller Chardi Christian (who mentored me when I began as a storyteller) developed a fantastic workshop around the tale, which involved making a doll like the one in the story. I invited her here to Mullumbimby to lead the workshop. Unfortunately family circumstances intervened and she couldn’t come. We tried again and again, Chardi couldn’t come. The local Byron Shire women, many of whom have interest in Goddess mythology and/or are very crafty still wanted the workshop. I was asked repeatedly to lead one myself. Not being the least bit crafty, I declined. Then I attended a doll making workshop. I failed utterly to produce a doll- which was very frustrating and disappointing, but I was so determined top succeed that I cross-questioned my crafty neighbour, and then realised how to make doll-making easier. I procured ready made calico dolls that just needed stuffing, so that most of the time and energy could be spent on the fun part: making the doll come to life with hair and simple clothes.
Last December I ran my first and long-awaited Baba Yaga workshop. A group of women gathered at my house and together we explored the fabulous tale. First I told the story. Then we discussed the very rich commentary written by Clarissa Pinkola Estes in ‘Women Who Run with Wolves’ as well as our own resonances with the myth. (Estes has recorded itunes of the tales from the book- just google them.) Then we each made our own Vasalissa doll with materials I provided. The looks of delight on the women’s faces was priceless as you can see.
I was too busy during the workshop facilitating to do my own doll, so I finished it after the workshop which I found extremely satisfying. I incorporated scraps that were significant to me which heightened the sense of the divine in my doll. My doll’s brown lap-lap was made from the suede sole of a baby slipper I had started, but never finished for my first child Tamlyn. She had pearls as a necklace, which represented my mother as I had given her pearls as a thank you. Her clothes were made from silk that had been made for a storytelling backdrop with my favourite colours and my favourite symbol: spirals. My daughter then got inspired and together we made her two more to sit with mine- which prompted a tale by Layla of the three Goddess-like ‘princess sisters’.
If you live in Sydney look up Chardi Christian, as I am sure she still runs these workshops which I hear are completely wonderful. If you can’t find her email me. 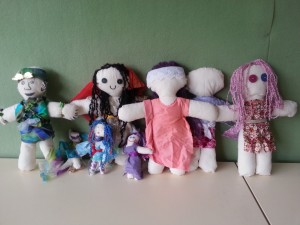 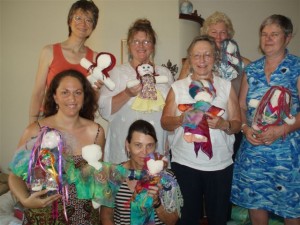 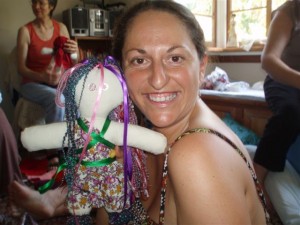