Stories in the Club LIVES ON! Changes and Continuity

The next Stories in the Club has been put together by the new curator, John Allan.

It gives me enormous pleasure to introduce the new curator of ‘Stories in the Club’ to any who don’t know him already. While there are members of Toastmasters also keen to help keep it going, for now, John Allan has stepped up and taken the helm rapidly, in order for the booking for the second Sundays at the Club to be kept. I forwarded an urgent email from the Club’s Manager and within a day, John had met with the Manager and rustled up an inspiring line-up. Then he quickly did all the publicity, social media and even created the great flyer below. Phew!! 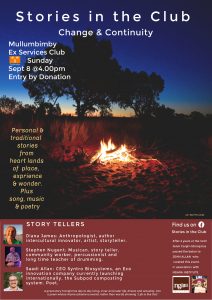 John is well known and loved in our community, beyond being the man whose exquisite orchids and flowers have beautified the stage every month for two years. (Only twice did he miss an event and then he sent his flowers along with someone else and one of those times was because he was in hospital!) 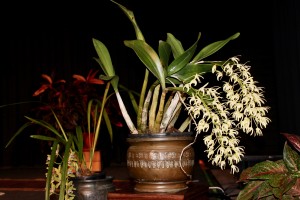 John and his wife Bobbi initially lived at the Bodhi Farm and Dharmananda Communities, on moving to the Northern Rivers, and have been involved in many important community actions, including the Terania Creek Protests, which their children attended in baby pouches. At that time John was a fine woodworker exhibiting nationally, and later a Community Artist. John has often been ahead of the curve. He went to Thailand to study Buddhism, in the robe of the Forest Meditation Tradition, in the early 70’s and currently runs three Buddhist groups every week, which he has done for the past 21 years. 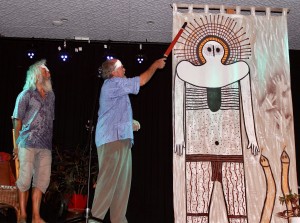 John started the first groups for Domestic Violence offenders in NSW 36 years ago, to help the men embody attitude and behaviour change. This led to a 25-year career as a psychotherapist. Later he co-founded ‘The Circle of Men’, which energised the Mythopoeic Men’s Work Movement in Australia, and he ran the annual Standing Up Alive Men’s Gatherings for a decade.  Through this work, a connection was established with the elders from the  Ngarnyin People of The Kimberly, Pitjantjatjara People of Central Australia and Yolngu people of Eastern Arnhem.

Together with Diana James, he worked as a Director of the Spirit of the Land Foundation, which was established by Pitjantjatjara Elders to assist inter-cultural sharing and intergenerational knowledge transfer, until it finished up. In 2001 Galpu Clan Elders ceremonially named and empowered him as Wititj, (Rainbow Serpent) and a “Wititij Person.”  An official and traditional boundary-crossing diplomatic role, to facilitate intercultural sharing. As a Law Man said “Not many have that name. It is for that healing. To be a bridge, to help that 3-way healing. Like a custodian for Wititj Law outside Arnhem land. You can ‘call’ us now to come and share Law now. Proper Way.”

In November, John will present a paper at the International Conference on Mind Humanities at Wonkwang University and teach a seminar at the University also, on the braided themes of Indigenous traditions, Buddhist psychology and practice, and Individual, social and environmental healing in this time of Climate Emergency and Species Extinction.

John is also a wonderful storyteller and an activist with enormous networks. John and Bobbi’s accomplished son Saadi is one of the tellers this month.

After two years, curating Stories in the Club at the Mullumbimby Ex-Services Club, Jenni Cargill has stepped down from the leadership role and John Allan has picked up the baton.

‘I decided to help out as many people in the Shire want these events to continue. I am there every month anyway with my plants and orchids to decorate the stage, and I have a long background with storytelling in many forms,’ John said.

The programme for next Sunday 8th September is ‘Changes and Continuity’, with three stellar tellers of tales, both personal and traditional, a singer and a poem or two. As usual, we will start at 4 pm. Entry is now by donation, as we want to encourage the notion of The Economy of the Gift as a balance to the Economy of the Market.

Diana James headed for the desert in the early 1970s to work at Fregon Art Centre with the Pitjantjatjara Yankunytjatjara peoples of Central Australia. Welcomed and taught the language and stories of country she quickly came to love wide desert horizons and it’s vast dome of sky. The desert country became home for twenty-five years and its people the extended family who have shaped her life since. In 1997 Diana and her three young children made Byron home port.

In 2002 Diana moved to Canberra to complete a Ph.D. in anthropology and then worked with Martu communities on the Canning Stock Route. In 2008 old friends at Fregon, now directors at Ananguku Arts enlisted her to work collaboratively across the APY, Ngaanyatjarra and Martu Lands recording two of the major Songlines of the Western Desert.

Guided by the elders, she led a multi-partnered seven-year research project, resulting in the magnificent Seven Sisters Songline Exhibition of 2017-18 at the National Museum of Australia. This exhibition showed that Indigenous Songlines are the original cultural routes of this continent and following them is a way back home to the heart of the country and its people. The generosity of many elders of all cultures inspires Diana’s storytelling.

Stephen Nugent is well known as a percussionist in the Shire. Martial Arts lead him to another world of physical expression: the rich dance traditions of Africa. The dancers he learned from worked with live drummers and that opened up the way of the drum. This is a very traditional way to proceed, as in Africa drumming serves the dance. Steve will share a traditional African tale with song and music played by him on the Illimba, the ‘concert grand’ cousin of the little thumb piano.

Saadi Allan has spent much of his life flying by the seat of his pants. He is CEO of Syntro Biosystems an eco-innovation company that is currently launching it’s first product internationally, the Subpod composting system. He was formerly the Head of Marketing with BeeInventive (Flow™ Hive), the company that launched the Northern Rivers beehive invention that took the world by storm on crowdfunding platform Indiegogo.

In April 2015 the campaign was ranked as the 5th largest in history, reaching $70k in 7 minutes and $12.4 million in 30 days. Saadi headed up the team that won the 2016 D&AD White Pencil at Ad Week, New York, which celebrates outstanding work in design and advertising that promotes positive change.

Saadi combines his background of marketing, sales, business strategy and activism with his passion for sustainable business and a deep respect for the earth and a love for poetry. 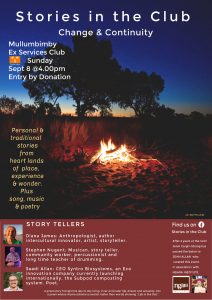