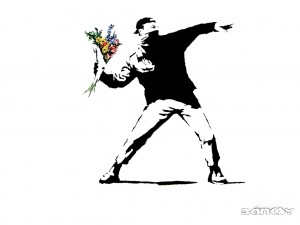 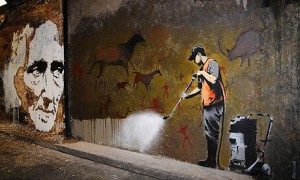 ave made a significant political contribution, and provoked heated discussion. I heard him discussed and interviewed in ABC Radio and the young male interviewer was positively aggressive and angry towards the man, seemingly beacuse his work now commands huge sums. People refer to the “Banksy effect”. I  wondered whether he is an actual person, since ‘his’ work has appeared from Bristol to Israel to the US, or is he a shifting collective? Having read a little more now , perhaps he is just one person. I know nothing about art- I just find his work stimulating and poignant and though provoking and very much in tune with what many people are feeling. But here is the link to the folktale of ‘Tipingee’.

Captain Paul Watson, reposted this fake report about Banksy’s arrest from a spoof site on FaceBook with this humourous comment:

‘Hey that’s not Banksy, I’m Banksy! Actually we all should be Banksy and everyone needs to inform the London Metropolitan Police that they are in fact the real Banksy…’ Many people didn’t read the post properly and responded as if it were true and/or as if Paul had believed it. Others responded with, ‘No I’m Banksy!’, as did I in a FB conversation with friends.

This playful phenomenon of many people pretending to be Banksy, is what reminds me of the folktale ‘Tipingee’. It is a Haitian tale of collective resistance.

In the folktale, many little girls pretend to be Tipingee, to protect her from a nasty, powerful (and magical) old man who wants to steal her away to be his slave! (If only that just happened in folktales- the stealing little girls away I mean!!) Here is a heartening, playful retelling of Tipingee from master storyteller Diane Wolkstein in an American high school classroom. 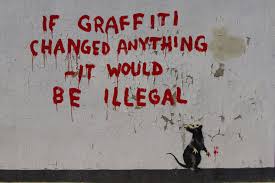 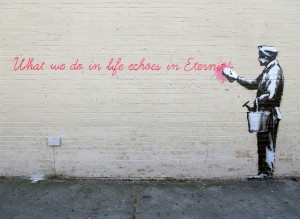 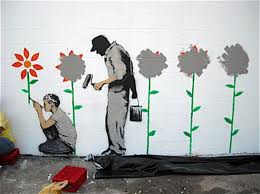 Diane, sadly is no longer with us, but she was a world renowned storyteller and author. She brought the tale of Tipingee to the U.S. and the world by writing a book “The Magic Orange Tree” (1997) after living in Haiti for some time.

She was also author of the version of the first story I ever told, the Goddess myth of ‘Inanna and her Descent to the Underworld’.