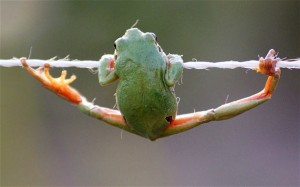 Some situations stretch you!

Don’t you love it when you are put in a situation that streeeetches your experience and knowledge, so that you learn  new things and develop new skills? This year, Book Week did just that for me! I had been enjoying rave reviews and responses… until I went to Milperra High, a school for newly arrived refugee teenagers. Half way through the  first show, I lost my audience. This has not happened to me in a looong time and as far as I can remember not as badly as it happened that day, since I started 21 years ago. As I had a second show to do there, I had to quickly swallow my dented pride, and think fast! With the help of the resident teacher librarian, we brainstormed a number of solutions and over lunch, I concocted a new set list. The second show went so well that it was a peak experience!! Hallelujah!

None of the other Book Week shows this year were quite that dramatic, but I did have quite a few ‘firsts’ as a storyteller and consequently learned a great deal! More on that next post. (Thanks to my lovely agent Helen Bain at Speaker’s Ink for all those great bookings!) I also got to meet lots of talented, fun muso’s, authors and illustrators when we got booked in the same schools.

Getting back to my empowering flop, here is what I learned at Milperra. After an intense discussion with the teacher librarian, I realised I had misunderstood her description of their language competence and therefore I had overestimated the language skills of the students. Also she told me that you cannot tell these students any story that involves a boat- even a happy story. I felt awful when I reflected that I had just told and sung them the story of my great grandmother Emily Jane and her difficult  journey to Australia in 1884. (This would have been good to know BEFORE I started!) So here are the things that made the second show go so well.

Firstly I got the teacher librarian to give a strong introduction, in which she set VERY clear boundaries, regarding behaviour and respect. She raved about my qualifications, including the fact that I taught at a University, because that is revered in their cultures. Then I explained that I had never listened to a story in a language that wasn’t my first one. In fact, I confessed, I didn’t even know a second language beyond counting to ten in German, but that I sometimes speak quickly when I get excited. So I asked them to make a signal if I was speaking too fast. I demonstrated my ‘go slow’ signal. One of the young men nodded and twice during the show he very respectfully gave me the signal, to which I happily responded and apologised. For me, this created a lovely sense of connection and community. Next, I borrowed an idea from my good friend Teeya Blatt, where I explained that as a storyteller, I am quite vulnerable to my audience. If they wanted to get the most from the session I explained, they need to go with me open heartedly. If they were to sit with crossed arms and closed hearts, I would likely get swept away in that rip, no matter how much experience and skill I may have and no matter how rich my tales were. However if they allowed me to, I could take them on a great story ride all the way to the shore. This was a calculated risk. It could have backfired, but luckily they appreciated this and their energy shifted. Nevertheless, as soon I began to introduce the first story, two young men in the front started talking over me. In my calmest, high school teacher voice, I firmly directed them to move from the front to the back row. Perhaps because strong boundaries had been set, they were fine with that. 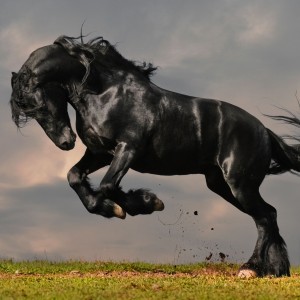 I began with an Egyptian story I learned from my friend and colleague Donna Jacobs Sife, called ‘The Black Prince’. (Laura Simms also tell it, but here is a video of UK teller Abbie Palache telling it). The hero of this poignant and tragic tale is black and eventually, very powerful. As the story unfolded, the entire audience, including the young men I had sent up the back, became deeply engrossed. But when I described the majestic black prince, the young man who had been the cheekiest, looked palpably delighted. He remained engaged and respectful for the whole hour, enthusiastically participating when appropriate. He had quite black skin and his teacher commented that every time I referred to the black prince he sat a little taller in his chair. 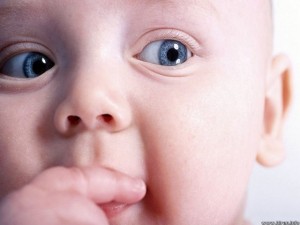 A baby boy features in The Blue Coat

Next I told the Blue Coat, a Jewish folktale involving a baby boy who grows up through the story. I usually tell to preschoolers and lower primary students, and though it does work for older age groups, I don’t usually tell it to older audiences. The teacher librarian persuaded me to tell it even with the felt board! This felt surreal to me, and I expected an uprising, as some of the male students were 17-18 years old with deep voices and whiskers! But they LOVED it!!! The themes of loss, community and healing were perfect and a simple circle story that repeats is much easier to grasp when you are struggling with the language.

Lastly I told Shingebiss which is set in the freezing lands of northern Canada. I learned it from my storytelling colleague in the US, Fran Stallings. This was the perfect ending: a story of resilience and triumph over adversity, which had no boats or oceans!  The arctic imagery of this story is sufficiently distinct from the settings in which these young people might have encountered any real life horrors. Shingebiss has a wonderful refrain (which you can hear here). The heroine sings to keep herself to keep strong enough to withstand the ferocity of ‘Old Man North Wind’.

“North Wind, North Wind fierce of feature, you are still my fellow creature.

Blow your worst you can’t scare me.

Some students sang along quietly which I imagined was because they felt it childish to sing along as many upper primary Australian students get shy about joining in the refrain (sadly). But when I got to the end, they clapped and the boy I had sent to the back row, called out “Sing it again!” Then I realised that because I was preoccupied with completing the story before the bell rang for 3pm, I hadn’t taught them the words first. I did that and they sang again with me, this time energetically and sonorously. As we got to the last line, the bell rang and the students spontaneously jumped out their chairs, punched the air triumphantly and sang “And so I’m FREE!” and then with claps and smiles and ‘Thanks Miss’ they filed out the door! See what I mean? A peak experience! What an honour! 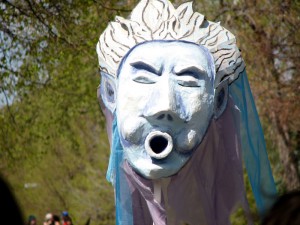