Changing the World One Local Story at a Time 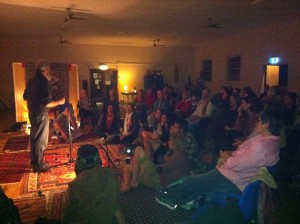 Last June, ‘The Byron Circle of Tellers’ at my prompting, held an evening of community storytelling called “The Golden Tale Local Stories Concert”. People were asked to submit 5- 8 mins stories set in our local Shire, but they could be fact, fiction or faction (a mix of both). Here I will explain what inspired me to want to hold a storytelling competition for local tales and why I think that telling local stories is profoundly important.

Back in 1999, I did my first storytelling tour of Aetearoa (New Zealand). One day when I arrived at the predominantly Moari school I was booked to perform at that day, the Principal greeted me warmly, took me to the hall where the children were waiting and said, “Before you tell us your stories Jenni, the children will sing you the song of our mountain and river.” 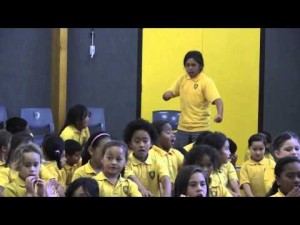 Rotoroa Primary students sing
(This was not the school).

The young students sang the song in Māori. They sang it with heart and pride -with great Māori Mana*, while doing strong gestures for their mountain and their river. I was greatly moved. (*The photo of Rotorura students to the right and this video of Maori primary school students of Tamararo 2012 Te Kura O Manutuke are not from the school I went to- but I added them for anyone who hasn’t seen a Moari performance in full flight!)

Later as I drove away and ever since, I have thought, “What kind of a world would we live in if everyone could sing the song of their mountain, tell the story and dance the dance of their mountain, their region and their river?” Then we might develop that deep spiritual connection to country as well as a reverent feeling of responsibility and custodianship.

I remembered another conversation I had had many years ago in Brisbane with a gentle, earth-loving activist I met, called Malcolm Lewis. We were talking about the impact of white invasion on the original owners of our land. He pointed out that if we went far back in history far enough, even we two white people with English origins, could eventually trace back to ancestors who had had a profound and soulful connection to country. He said, “We lost our connection to country too- only it was much longer ago for us.” He gave historical examples. Perhaps he referred to The Inquisition which targeted those who performed earth rituals. I think he also talked of “The Clearances” of the Highlanders in Scotland as an example.  With the rise of industrialism and rationalism, people lost their ancient traditions of being in harmony with nature. I am a great lover of science and I am glad we are too rational to be superstitious, yet we need to reclaim some of the healthy earth honouring traditions of our ancestors.

That is where the healing power of the arts can come into play: song, dance and story. It reminds me of a story my friend and mentor Donna Jacobs Sife  taught me, called ‘The Woman Who Would Not Tell Her Story’. 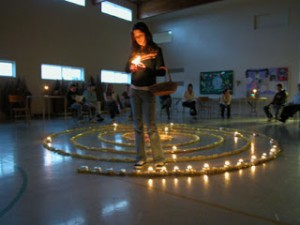 It also reminds me of Thomas Berry and his ideas of the Universal Story , as well as the Deep Ecology movement. A local activist John Seed has been a strong voice in Australia for the movement and has created beautiful, simple rituals to help westerners reconnect with the earth and get a sense of perspective. He established the Rainforest Information Centre or Network in Lismore and rituals like the Council of All Beings. (I had the great fortune to stay at the RIC briefly in 1989.) An American, Sister Miriam Therese McGillis developed the Cosmic Walk, which is a symbolic re-enactment that helps us enter personally into the story, by walking the story of the universe, the story of Earth, the story of the human, the story of you and me.

Storytelling is a powerful way of helping us to connect to our love of place. Those of us who are non-indigenous who cannot claim connection through our ancestors, can celebrate our love of place by telling our own stories of country.

The more that we tell the story of our country, we sing the song of our country and dance the dance of our story, the stronger we are embedded in it and the more likely we will be to defend it. And then we will be inspired to get off the couch and actually do something about it. The more that we share stories in community, we’ll be more bonded to our other community members so that we can actually work together harmoniously. So it can have many knock-on effects. That was what I was humbly hoping would come from the evening.

But telling local stories makes for a fun night for whatever the reason. My next post will be a report on the beautiful enriching evening we had with photo’s and soon we’ll also have recordings to upload.

The reason we called the concert Golden Tales, was because we held it one day after the Brunswick Heads Old and Gold Festival  which happens every June long weekend. The Old and Gold Festival celebrates history, bric-a-brac, antiques and all things ancient, historical and retro, so we thought it certainly needed some storytelling! Also there are many great stories in the community, but no public forum to share them in.

Here were some of the provocations I offered to help people come up with a story.

My next post will be a report on how the concert went with more images and soon we will have recordings to upload!!

Have you got a story to tell? Our next Golden Tales Concert will be in Spring on Sunday, September 20. Details at the Golden Tales Locals Stories page.