First ‘Stories in the Club: Drawn from Life’ for 2018 and a record crowd

We attracted a capacity crowd last night with all 140 chairs taken! Forty people had to sit on the tables, the only thing left to sit on. There were 180-200 people all together. Athol Compton, traditional Minyunbul custodian of the First Light people (Bunjalung), gave welcome and told a beautiful version of ‘The Three Brothers’. Behind him is John Allan’s very fresh painting of the Wadjina (painted for our gathering), which was shared with John by elders of the Kimberley, the Sunset people. 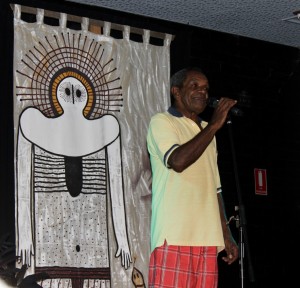 Dr Mary Gardner, marine biologist and ecological historian, writes regularly for the Echo. She told a new style of true animal story, ‘The True Story of the World Oyster’. She began by asking ‘Is the world an oyster or is the oyster a world?’ Then she gradually and poetically answered her question. She ended by getting us to stand up and sign up to join ‘The World Oyster Liberation Front.’

Simon Richardson, Byron’s Mayor was once a dreadlock-wearing, fire-twirling environmentalist participating in direct actions. He told a beautiful story called ‘The Chant that Calmed the Mob’- the tale of the power of the circle and the power of nature. He ended by leading us to sing the chant in the story. Many in the audience knew it very well, as there were many experienced campaigners present, including Bobbi Allan, John Allan’s wife and Katrina Shields who amoung many other environmental actions, brought Joanna Macy to Australia. 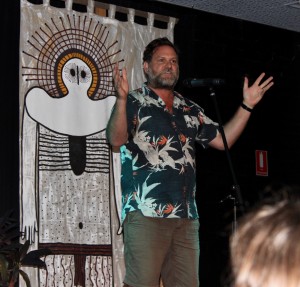 Jim Tait, environmental scientist and consultant, Mullumbimby local, husband Dad and pantheist told ‘Mangi bilong cuntrisid’, the tale of a bush kid from Papua New Guinea who became an environmental scientist and subsequently a pantheist and of his hopes and fears for the future. He was very passionate and allowed himself to reveal the emotion a scientist and father feels as they monitor and report on an environment they love so deeply as it becomes degraded, and the feelings when his children ask him, “What do you really think Dad?”.

John Allan and Harry Brown shared a story they had been taught and given permission to share: the story of the origin of the Wunnan ..the Sharing System from the Wandjina country in The Kimberly. The story had story traces, picked up or the last 25 or 30 years, from Arnhem Land and Central Australia. John painted the spectacular backdrop we had on the stage of the Wadjina, which the elders had shared with him and given John permission to share and teach.

Lastly, I (Jenni Cargill-Strong) told the story ‘The Bird with the Most Beautiful Song’, a tale developed by US storyteller, Laura Simms from a short, simple story from the Mbuti (BaMbuti or pygmy) people. The Mbuti live deep within the Ituri Forest, which is at the heart of the Congo jungle. I was accompa 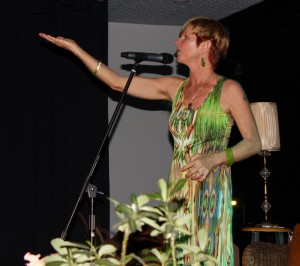 nied by my friend, Lynton Francois Burger who played an mbira, an instrument played in the Congo. The mbira he played has quite a story behind it too. It was given to him by his father and was made in South Africa by a prisoner on death row from flattened nails and a wood scrap. I had been working on the story for about five years and finally evolved the new improved version in the days before ‘Stories in the Club’, with the help of Lynton and Mitchell from my writers group, the Byron Bay Inklers. (I had bought the dress I wore on Sunday four years ago, specifically to wear for that story, but it had taken me four years to get the courage to wear it, as it is backless. Before the concert a woman came into the ladies where I was checking my hair and said, “That dress evokes the birds of some deep jungle.” “Correct!” I replied.) The story tells of the importance of a magical bird who brings the rain whenever she is made an offering of food, song, dance or story. In the story, we repeatedly made a refrain ‘and the rain came down: sweet, blessed rain.’

To finish the evening my beautiful friend, Biodanza teacher Jazmin Tassell, lead us in a dance I adore- Shambalayla. As we dance, we make gestures to thank and honour ourselves, the earth, the cosmos and heavens, then each other- our community.

When we left the club, a gentle blessed rain was falling and as I drove home I stopped to photograph the enormous double rainbow that had formed over Mullum! Nature indeed responded to our songs, stories and dances! Big thanks to everyone who helped to make it such a magical night.
More photo’s at the ‘Stories in the Club’ FB page and at Flickr.

February ‘Stories in the Club: Drawn from Life’