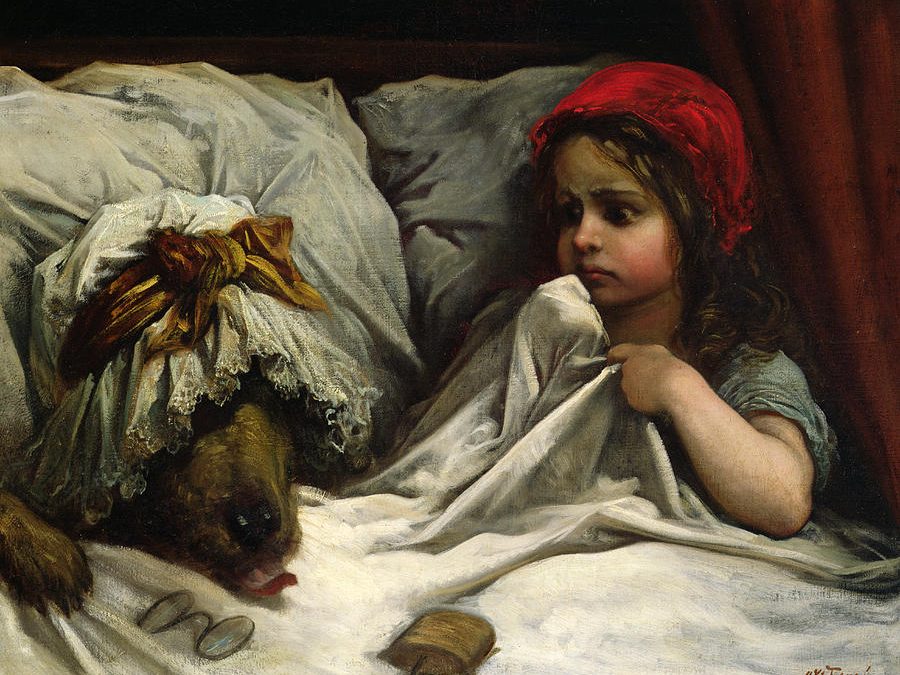 ‘Little Red Riding Hood’ is one of the world’s most popular and oft retold folktales. Versions range from the moralistic version by Charles Perrault, the Grimms Brothers, simplistic watered-down picture books for preschoolers, to Disney films to erotic cartoons for adults. But who was she originally and what did she represent? Who was the wolf and why is he a werewolf in the older tales? What does this deeply popular story and its variants tell us about Western culture and our relationship to our bodies, our sexuality, to nature and the wild? How much did Perrault’s patriarchal values distort the original uplifting trickster tale?

As I prepare to perform ‘L’Histoire de la Grandmere’ locally at Tintenbar Upfront on Friday and then on the following Monday at the  Australian FairyTale Society Conference, I am completely smitten, bedazzled, enamoured and enchanted by the earthy, bloody and gutsy wondrousness of ‘L’Histoire de la Grandmere’. It is the dark, sexy French precursor of ‘Little Red Riding Hood’ with a triumphant trickster heroine. As Covid restrictions relax here, I have been able to tell ‘L’Histoire de la Grandmere’ to live adult audiences who have been deeply intrigued by it. Listeners have urged me to get it out into the world, especially mothers of teenage girls. I resonate strongly with the thesis of Jack Zipes, that the ways this story has been retold since the seventeenth century have contributed to and reinforced patriarchal rape culture, especially in blaming the victim. So it’s dawning on me that, yes I really need to focus on getting it out there in various forms.

There is another level of the tale which I am currently pondering. I have developed three categories for storytelling for change-makers, and I realised that  this older version can be rewoven so as to reawaken our understanding that we are nature. It’s a tale that can encourage us to plunge OFF the path, honour our animal instincts, step into the dark wood to experience its wisdom and wildness, thereby rekindling our own.

According to Jack Zipes, ‘L’Histoire de la Grandmere’ or ‘The Grandmothers Tale’ was told by French peasants around the 15th century, though Wikipedia suggested with references that it was told as early as the 10th century. (I am not sure how historians deduce these things about oral tales.) It had various names, including ‘The False Grandmother’, or ‘The Path of Needles and Pins’.  A shrewd young woman is enticed to perform a striptease by a werewolf (not a wolf) as he pretends to be her grandmother. She does so, but once naked, awakes from the enchantment and cunningly outwits the werewolf. In an ancient version I stumbled upon years ago in an excellent article by via Terri Windling, the girl’s final escape is aided by three helpful laundresses and accompanied by images of rebirthing in the river. No rescuing males at all. The laundresses are also referenced

I couldn’t find Terri Windling’s fascinating article ‘The Path of Needles and Pins’ for a long time as the old links were broken. However, happily I just found an archived link for it via Wikipedeia here. For any of you who are fairytale nerds like me wanting more detail about the historical transformations the tale underwent, read hers first and then if you’re still curious there is Angela Slatter’s ‘Life off the Path’. Otherwise read on.

The most famous versions are now those by Charles Perrault and the Brothers Grimm. Perrault may have heard this version from his mother, who according to Zipes, grew up in the region the story originates from. * In the late 17th century, Perrault ‘Le Petit Chaperone Rouge’ had added a red cape, which had never been present in ten oral tellings, characterised the girl as spoilt and naive, the grandmother as overly indulgent and took the story  cut out the happy ending, took away all heroines agency and delivered a trite story that ended with the stifling moral that ‘good little girls should stick to the path’. He wrote ‘Le Petit Chaperone Rouge’ for the aristocracy. Good little aristocratic children needed to ignore all natural impulses to be recognised as superior in breeding to their peasant underlings. * But to be fair, if Perrault hadn’t done it, someone else would have.

Folktales generally follow the prevailing cultural currents, but the printing press changed this process dramatically and profoundly. Rather than evolving slowly in co-creation between teller and listeners of varying classes as oral tales always had, a printed version usually penned by someone of higher class, education and privilege than a peasant, could completely dominate all other versions, until it became regarded as the essential version. I have heard that there are regions in Germany, especially where Grimms tourism thrives, where people still consider the Grimms versions as the only true versions. Indeed, this misunderstanding is quite common throughout the world.

In the early 19th century the Grimms based their retelling ‘Rotkäppchen’ or Little Red Cap on Perrault’s story. In two centuries Perrault’s bourgoise tale had so eclipsed the earlier peasant oral versions, the richer peasant tales were all but forgotten.

For two more centuries, Little Red Riding Hood has been published for children all over the world, and all have faithfully stuck closely based to the Grimms tale, until it has become the most published folktale globally.

Join me on Saturday, June 10 for a half day online workshop, ReWilding Red Riding Hood.

I will tell the story and then you can participate in lively facilitated discussions in pairs and small groups, as we explore our ideas out loud in a supportive learning community. Receive a provocation to craft your own rendition after the workshop.