September Stories in the Club 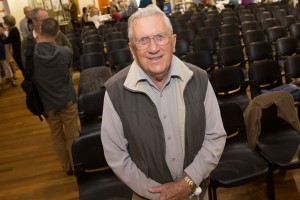 Last month Frank Mills in conversation with Malcolm Price, charmed 100 storylovers at the Mullumbimby Ex-Services Club with  portraits of the changing roles of women in Byron from the 30’s to the 60’s. “When I looked at photo’s of past history,” began Frank, “ I could only find one photo of a woman working. If I had been looking for photo’s of women in bathing costumes, the number would have been different. This talk is about why women should not be recorded equal to men in history, but I am not a time lord and I don’t have a tardis, so you will have to rely on my memory because I am a 1828 vintage.” He then went on to talk about how much farming work women did, how influential they were and how superior their skills were in many facets of life at that time. He delighted the audience by explaining how the Sea Change movement of the sixties, catalysed by the surfies morphed into ‘She Change’ developments in the 1970’s as women became much more influential and more became Councillors.

Teeya Blatt enchanted the gathering with her elegant, original story ‘Hymn to Persephone’ and Susan Perrow told a story from the 1974 flood, of getting trapped for many days in a banana shed with her husband and another couple.

Meredith Yardley warmed everyone up with some Laughter Yoga and because curator and MC, Jenni Cargill-Strong was too sick with the flu to even sit up, Bruce of Mullum Magic Toastmasters graciously took on the MC role at late notice. The stories were recorded by Dione Natasha Green for ‘The Middle Man’ show on Bay FM and Sharon Shostak also filmed all the stories and these will be released soon. Check the ‘Stories in the Club’ Facebook page for details. Listen here.

Jenni told “The Woman who would not tell her story”

Graeme was very releived after his tale was told

Shona told about the pain of leaving Lake Atitlan, Guatemala

October ‘Stories in the Club’

Add to your diary the next ‘Stories in the Club’ Sunday, October 8, 4pm at St Martin’s Hall, 38 Stuart Street, Mullumbimby.

Read about the upcoming October ‘Stories in the Club’ here and FB page.