“Shelley and Rustle” an environmental story of turtles and plastic

Here I am in the recording studio helping Michael, my sound engineer and producer, add the finishing touches to my new CD, “The Story Tree and other nature tales”. It is the culmination of several years of dreaming plus a year of writing, drafting and recording. It gets pretty exciting at this point as it all starts to come together. Of course I should have gotten to this point three months ago, but that is another story. One of the stories we were ‘working’ on (though it felt more like playing), was Shelley and Rustle. We recorded sound effects: truck sounds (me doing vocal sounds that hopefully resemble a truck), a plastic bag rustling (me manipulating a plastic bag) and me singing like a plastic bag. (It took a bit to get into character!). I wrote the story last year after a photo caught my eye in the local paper. 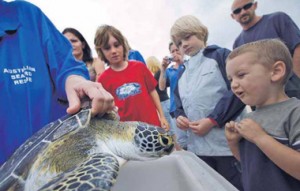 A young smiling boy was pictured with a green sea turtle. The boy and his father had found the turtle months before lying listlessly on the beach. The father and son realized it was ill and called our local rescue group, “Ballina Sea Bird Rescue”. The volunteers took it back to their center, found plastic in the turtles stomach which explained its ill health. So they carefully removed it and then nursed it back to health. This took over three months.

The photo was taken on the day they re-released the turtle into the Sea and the father and son came to wish it good luck. Next I saw a fabulous poster in the window of our local council office. Plastic bags were floating in the sea 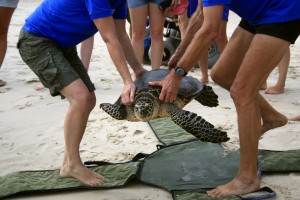 Australian Seabird Rescue release a turtle back to the sea 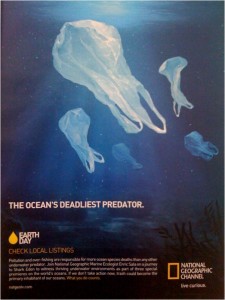 So I wrote the story of Shelley the green sea turtle and Rustle the plastic bag. Then I saw a You Tube clip about the gigantic swirling spirals of rubbish at the centre of most of our seven oceans. The idea for “Shelley and Rustle” was born. After I wrote the initial draft, I came across a video with a similar concept (there are really no new ideas under the Sun) about the plastic lid of a throwaway coffee cup that floated out to sea. T

I called the “Ballina Sea Bird Rescue” crew and asked if they would mind listening to my story and checking it for accuracy. They kindly agreed to take time out to do that and gave me loads of helpful feedback. They also gave me a tour of the facility and educated me as we chatted. “Ballina Sea Bird Rescue” took that name because they had originally started rescuing injured and ill pelicans. But then their phone began to run hot with requests to also rescue sick turtles, so they generously took that work on as well. They told me the only turtles in our waters that ate jellyfish were leatherbacks and loggerheads. They said leatherbacks swam to Fiji to nest, so I turned Shelley into a leatherback and wove in a journey to Fiji. (Hmm come to think of it I’d like to go there too- as long as I didn’t have to swim all those thousands of kilometres!)

After another  33 or so drafts the story was ready to be read to my kids and then the kids in their school. But still when I got to the recording studio I made more changes as I heard it back. Unfortunately this story gets repeated all too often with all sorts of sea creatures. Recently there was another almost identical story in our paper. Another boy and his Dad had helped Sea Bird Rescue save another green sea turtle and it was was released after being nursed back to health. I fervently hope my little story helps raise awareness about the huge impact our plastic bags have and how important it is, to not only keep plastic out of the Sea, but actually stop using them altogether!

Wouldn’t it be terrific if one day the ocean was once again clean and free of plastic, oil slicks and other pollution? Every little thing we do will help that become a reality. So remember next time you go shopping- take re-usable shopping bags and so no to plastic- as much as you possibly can! Below is the first paragraph of the story. Find the newspaper article links on line.

Shelley and Rustle 2009 © Once upon a time, there was a handful of little plastic pellets called Rustle. All Rustle longed for was to be useful. He dreamed of being a red umbrella or a yellow raincoat or a plastic toy… Then, one day, he got a job. He was taken to a big noisy factory and turned into…. a shiny, new, white, plastic shopping bag, along with millions and millions and millions of his friends. He loved his new rustling sound, but all Rustle longed for was to be useful. Rustle and his friends got loaded into a truck and they drove for hours and hours and hours to a giant supermarket…

RECORDING: Listen to the recording for free or download an independent artist by buying it for $1 here!

VIDEO: In 2014 a teacher librarian filmed me telling this tale to her Yr 2 students. Watch here.

Read my article on ‘Shelley and Rustle’ in the Healing Story Alliance journal here.

Australian Seabird Rescue (based in Ballina) are here.