‘Stories in the Club’ warmly embraced 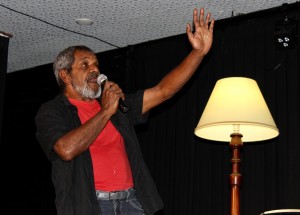 Over 100 people attended, some of whom had travelled from as far as Nimbin, the Gold Coast and Lismore. Organisers, Jenni Cargill-Strong, Jennifer Grainger of the Ngara Institute and Morag Wilson were thrilled at the response. Feedback on the night and since has been enthusiastic: “That was fantastic!” “What a wonderful idea.” “You’d better provide tissues next time, the first tale made me weep!” “When is it happening again?!” On top of that, when Jenni put the request out to her networks for storytellers, the enthusiasm was so great, that she has tellers booked up until December for the new monthly event.

In September, local legend, beloved historian, former farmer and fire chief, Frank Mills will be the feature teller. Frank, now 90 and living north of the Shire, will be in conversation with Malcolm Price of Creative Mullumbimby and Social Habitat. Alongside Frank, there will be three former members of the ‘Byron Circle of Tellers’: Teeya Blatt, writer, storyteller and Byron Youth Service Manager, who will tell her ‘Hymn to Persephone’; Susan Perrow, internationally published author and founder and Director of Periwinkle, will tell a flood tale from 1974 and professional storyteller, Jenni Cargill-Strong will tell a tale of the feminine. Jenni will also share the emcee role with Bruce Long, former President of Toastmasters.

Arrive at 3.30pm for a 4pm start. After the stories, storylovers can eat at the Old School Restaurant. ‘Stories in the Club’ is supported by the The Ngara Institute, Creative Mullumbimby, The Story Tree Company and Stories on Foot. For more information go to: https://storytree.com.au/stories-in-the-club/ 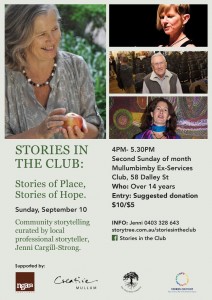 Stories can be factual, fictional or factional – which is a blend of the two. We will aim to have regular stories from indigenous tellers. Usually, six tellers will get 8-10 mins and in subsequent months, there will be opportunities for beginner tellers.