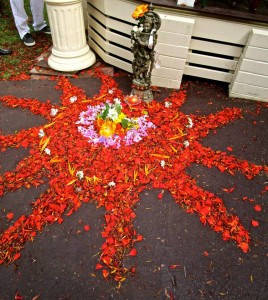 A beautiful petal mandala created at a Summer Solstice party I recently attended.

A very happy Summer Solstice to everyone in the southern hemisphere! (Happy Winter Solstice to you northerners.) According to our European ancestors, now is the time to celebrate the abundant ripe energy of the earth. (If you are looking for a forest loving Santa-free Christmas story, read the previous blog post.) 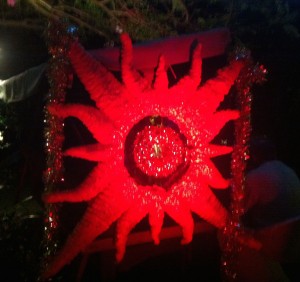 I live in Byron Bay, once called Cavvanbah by the Bunjalung people, on the most easterly point of Australia. For the local Arakwal and wider Bunjalung clans, this time of year may have been thought of differently. They knew six or more seasons and marked the changes according to bio-indicators rather than a calendar, such as what was flowering or which bird was migrating. I hope to learn more about this, but while I am ignorant, I will ponder what my ancient pagan ancestors believed. Here is a pastiche of information I have sewn together rather roughly.

The mythic Green Man or the Great Horned God was

born at the winter solstice, unites with the Goddess in marriage at Bealtaine, and dies at the summer solstice to bring fertility to the land as the Sacred King. 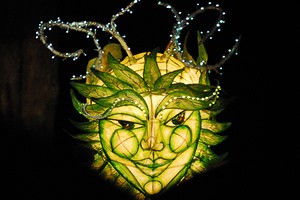 A friend gave me a wonderful book years ago called “Circle Round” by Starhawk et al and she says: The Summer Solstice is the longest day and the shortest night. The sun has grown to its full strength, and summer begins…The Summer Solstice reminds us that nothing lasts forever. We do not live in the unchanging twilight realm of Faery, but in the living, dying and fading, and growing realm of earth. Whenever something is completed, we must let it go.

Because the things we love don’t last forever, we love them all the more while they are here. But letting go of things and people is never easy. The Summer Solstice is a time to practice giving things away, letting go of what is completed and done…

So what did our ancestors get up to and what do modern earth lovers do at this time? Here are some ideas.

There are many routes by which we can open our minds and souls to the Sun within the context of a modern Druidic spirituality. Here are some starters for personal contemplative and ritual techniques: