‘The Byron Circle of Tellers’ tell tales at ‘Tintenbar Upfront’

by storytree | Aug 17, 2014 | Public Performances, Stories of the feminine, Storytelling 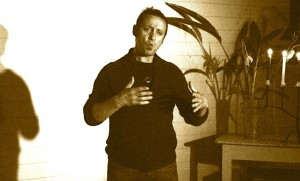 For a year now, I have been meeting regularly in a closed group with a wonderful group of local tellers. We tell each other stories and discuss them. It has been joyful and enriching. We had our first appearance at the Drill Hall at a concert we organised last year, which was well attended and went well.

This year, one of our members, Susan Perrow, told us about a wonderful local venue and performance night she had been to called ‘Tintenbar Upfront’. She had been invited to tell a story and suggested we consider it, as it was very friendly and lovely. The door takings all go towards a different charity each month. So in May, I got up and told my saucy version of the Italio Calvino’s version of ‘Mr Fox’ or ‘Silvernase’ at Tintenbar Upfront (which I told again at Kavisha Mazella’s concert).
Peter wrote about it on the website: After the break, Jenni-Cargill Strong had the audience enthralled with her ability to deliver an old folk story that she had rewritten. The heroine triumphed, the Devil was defeated and we all were morally uplifted! Flawless performance. 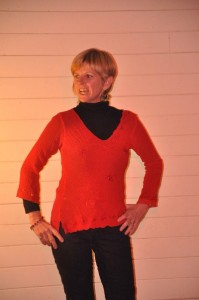 On Friday, August 8, we told stories between musical acts. The audience were so warm, receptive and wonderful that we were all jumping out of our skin with brilliance- if I don’t say so myself! Teeya Blatt, loking exotic and graceful, told the frame story from Sherehezade, John Imbrogno playfully told the Irish fable “Luckless One”, Annie Bryant sang and told her exquisite rendition of the Celtic Love Story of ‘Belena’ and Bere, with great mana, told of his amazing experience in Hawaii of a brush with his ancestors! I told “The Woman who Would Not Tell Her Story”, giving the context of the time I told it at the Bentley blockade and finished with an adult version of “The Mulberry Tree”, which includes a lotus birth and a salty placenta that is not in the kids version. Byron Circle members, Catherine Frederick, Lynne Preston and Susan Perrow with her hubby John, plus Annie’s parents all came along to lend us support.
“The Heart of the Story” radio podcast
The takings at the door went in part to fund the annual soundcloud hosting fee for ‘The Heart of the Story” a storytelling show hosted by Teeya Blatt and Annie Bryant. You can listen online anytime to many of the magnificently woven story episodes here: https://www.theheartofthestory.com.au/podcasts/view-podcasts/. 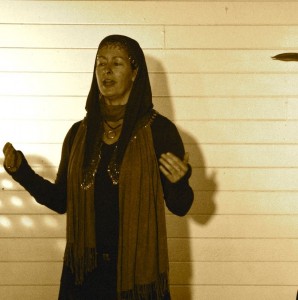 Teeya, co-host of ‘Heart of the Story’ BAY FM 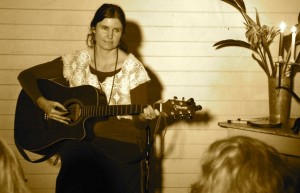 Annie, co-host of ‘Heart of the Story’

Tintenbar Team: mutual fans
The team who run Tintenbar Upfront are just amazing. Pete is such a warm, generous MC that he brings out the best in everyone. We all decided it is- without doubt- the best place to perform anything- story or music!
Here is the feedback I sent Peter afterwards:
Dear Peter,
Thanks again to your amazing, warm, generous and entertaining team for another fabulous night at Tintenbar. I have raved to everyone about how great the atmosphere is : actually one of the best places to tell a story that I have been to in many a year. Performing at the Living Earth Festival last year at the Mullumbimby Community Gardens and one full moon night about 18 years ago at the National Folk Festival are the last times I had such a perfect audience and vibe.
You all work seamlessly together to build that special feeling and I admire your persistence. Your MCeeing has a lot to do with it too. You create a great welcome which shows you are thinking about each person and welcome them so warm heartedly and THEN you listen so well during their performance that you can say something pertinent and supportive afterwards too! It is a rare skill!

Will you please thank all the tellers for their superb stories, told with panache, skill and heart. The audience loved every one of them. Thank you too for your wonderful mulberry tree tale as well as the others. I particularly loved the image, which you created so perfectly of the mother at the clothesline “wondering where her daughter was” while the little girl tittered in the tree. We would love to have more story telling in future.
Cheers, Peter
We have been invited to go back in November, so I’ll be performing one more member of the Byron circle and my partner Max will do a few bush yarns.
If you are local, maybe we’ll see you there! 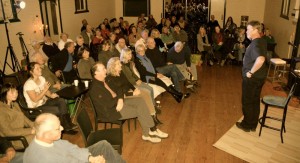