I love the work of Dr Brene Brown! When I coach people to tell stories and or become more confident at giving presentations or speeches a huge percentage of what I need to do is work with inner gremlins that create negative ‘psychobabble’ as I like to call it. But Dr Browns work applies to everything in life. Right now as we need positive changemakers to be at their most powerful and effective, her message is enormously important. Let’s all shine as brightly as we can, being vulnerable all the way!

When your gremlins tell you to play small, listen to Dr Brene Brown!

Brené Brown: Why Your Critics Aren’t The Ones Who Count

You can also read the Huffington Post article below and watch the short Oprah clip here. Dr Brown has also done countless talk shows and you’ll find her all over the place. My favourites are her TED talks.

Brené Brown On The One Thing More Terrifying Than Being Vulnerable

Shame and vulnerability researcher Dr. Brené Brown says we all have a choice in life whether to put our true selves out there or hide behind our fears. While many people are afraid to be vulnerable, Brown explains in this clip from “Oprah’s Lifeclass” why the alternative is far worse.

In the video, Brown starts by reciting a quote from President Theodore Roosevelt that she says changed her life and inspired the title of her book, Daring Greatly:

“It’s not the critic who counts; not the man who points out how the strong man stumbles or where the doer of deeds could have done them better. The credit belongs to the person who is in the arena. Whose face is marred with dust and sweat and blood; who strives valiantly … who at the best knows in the end the triumph of high achievement, and who at the worst, if he fails, at least fails while daring greatly …” 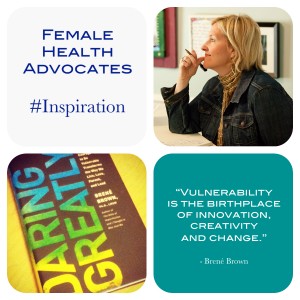 The second thing she realized is that comments from “Twitter thugs” — people who never risk anything but criticize the people who do — don’t matter. “If you are not in the arena also getting your butt kicked, I’m not interested in your feedback,” Brown says.

The third thing culminates everything Brown has learned over the past 12 years of studying shame and vulnerability. “Vulnerability is not about winning, it’s not about losing — it’s about having the courage to show up and be seen,” she says. “It’s about willingness to say, ‘Look, I don’t have all the answers.'”

If you’re afraid to be vulnerable, Brown says you’re not the only one –- but there is something even more terrifying.

“That, to me, is what daring greatly is,” Brown says.