Winter Solstice and the rekindling of the light

“Another world is not only possible, she is on her way. On a quiet day, I can hear her breathing.”

As we passed through the darkest night of the Winter Solstice, there was some pretty dark political news gathering on the horizon overseas and here in Oz. I found myself saddened but also a bit panicked about a triple bill that could greatly reduce our civil liberties. I had some time, so I took the actions suggested and made multiple posts on FB.

In an effort to calm and ground myself, I used a few Joyality techniques. I also pondered that draconian laws can ignite mass action and wake us from our collective, comfortable, complacent slumber. We can be the ones we have been waiting for, dream up and build the world we want to live in and get ourselves back to the garden. 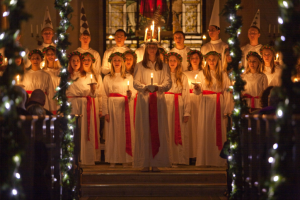 In Scandinavia, at the Winter Solstice or the longest night, the rekindling of the sun is celebrated with candlelit processions and a maiden wears a crown of candles, evoking the ancient Goddess of the Light.

As slowly, the days grow longer and the nights grow shorter, I also pondered that as well as resisting, I have the opportunity to rekindle hope and build that world Arundhati Roy talks about. In Sweden, Winter Solstice celebrations still feature a maiden wearing a crown of candles known as Lucibruden, or Lucy Bride to represent the rekindling of the light, evoking the ancient Goddess of Light. She is a symbol of the journey out of all kinds of darkness: both literal and metaphorical.

My way of helping people connect to eachother in comunity and to the stories that can noursih is to create that world is by putting on monthly community storytelling ‘Stories in the Club’. July 8, the theme is ‘Back to the Garden’. Read more at the next blogpost.

Here is a previous blogpost on the winter solstice: http://storytreeaustralia.blogspot.com/2010/06/happy-solstice.html