Woodford Folk Festival for families – why go there?

the wonder and beauty

To tell the truth, I have a love-hate relationship with Woodford Folk Festival. That is because it is usually either stinky hot and dusty or very, very muddy. It’s a bit like after a woman gives birth, you say “Never again”. Then the baby is so cute, you forget how it hurt and off you go and have another and it’s both wonderful and terrible. As I’ve gotten older and also now that I’m a Mum, usually just after Woodford, I say “I’m not going next year.” Then application time comes around a few months later… I get excited and so does my partner. We put in our applications. Then packing up time comes. I think of heat, mud, crowds and finding a camping spot and I think “I’m not going next year.”…. Then we get there and it is absolutely fabulous, and I think “How could I have POSSIBLY considered NOT coming?”…..and the cycle continues. I have been to Woodford Folk Festival (including Maleny as it once was) 16 times. All but one of those I went as a season camper and all but twice as a performer.  Since having a family eleven years ago, I have gone nine times with my partner Max and two children. So why have I gone so many times and why might you? Why go?: I love Woodford for a million reasons, but to name a few I’ve whittled it down to the following. (Ask me another day and I’d rattle off different things.) I love the sense of community, the respect for culture, diversity and children, the spontaneity, beauty, attention to detail, music, dance, poetry, bucket loads of fun, inspiration and idealism. 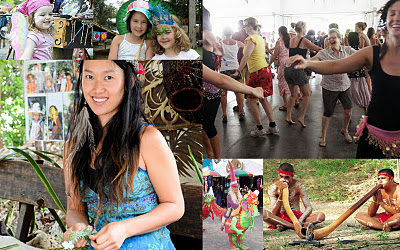 This year I could only go for two days as I had work on at home (marking Storytelling assignments by Education students at Southern Cross University). I went to compete in the Finals of the Spirit of Woodford Yarn and Storytelling Competition. I took my daughter Layla (8). Usually my partner Max (aka Salty Pete the Pirate) and son also come and we arrive early, camp and stay an extra two days. (More about that next post). This year the weather was perfect! It was fine with a few light showers and cool breezes. The mildest Woodford I have ever been to. What did we see this year in our two days? I’m glad you asked!

Backdrop for the Kids show of the same name.

We spent most of our time in the Kids Festival and Circus tent, which constitutes about one millionth of the entire options at the Festival! Layla played with her best friend- the daughter of a couple who work at the Children’s Festival and are friends of ours. Brie and Layla met when they were tiny and have been fast friends ever since. The Children’s Festival: Within The Kid’s Festival the girls joined in with Hip Hop and Zumba dance workshops, saw ‘The Great Big Story Book’ show, a Japanese storytelling show, made a puppet from recycled bits, made a pottery mushroom, played together for hours in the cool, shady sandpit and had their faces painted twice. We listened to large groups of happy people playing and singing in the Kids daily ukelele’s workshop too- though there seemed to be far more adults than kids!

Performance outside one of the circus tents

Circus: We saw several Circus Shows in the Circus Tent which we loved. One was a family-friendly pole dancing show. I checked if it was suitable before we went in- usually adult shows are late at night. One of the performers was a champion pole dancer. She was all muscle and completely defied gravity. We saw the most amazing hula hoop act I’ve ever seen (and I’ve seen a few). We enjoyed a clowning circus act which was not your usual clowning routine. The set had a Film Noir black & white (50’s) flavour with a live band on the stage. Four men and one woman and lots of slow humour. Lots of pregnant pauses- not fast paced adrenaline pumping and totally enjoyable- because of that. The audience went wild at the end. We saw the Side Show Alley Freak Show- which was well freakish! We both had to cover our eyes at times. Not quite sure I should have taken Layla, but she seems unscarred! We saw the fire show at night and saw another woman with a hula hoop but this one had flames on it. Beautiful. The next day Layla joined in at the Circus tent where she borrowed a hula hoop, but to my frustration, steadfastly refused to listen to any of the teachers circus skills gently and cheerfully teaching anyone who was interested. (Parental sigh.) Street performers: We saw street performers-  the ladies with rocket bosoms and a couple

with a strange winged contraption. We saw indigenous band Sol Nation at the “Alter-native” venue and while I had a great little boogie in the white sand while the girls pretended to be nocturnal animals. Butterflies: We walked the butterfly walk and saw two butterflies, enjoyed the cool shade of the canopy and the informative butterfly posters. Food: We ate Chinese pork buns, Portuguese tarts (mmm), mango drinks, chicken kebabs, jaffles and fruit smoothies. When we season camp we mostly cook back at camp. 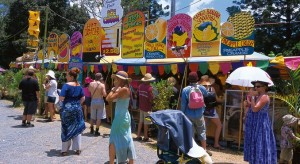 Bubble fun: There is a stall opposite the juice and jaffle stall in slightly shady  crossroads in the middle of the festival where a man and woman sell bubble wands. Layla adored catching the bubbles as did most kids at the Festival. He wears out his shoulder- constantly and patiently making bubbles- whether the parents look about to buy or not. Maybe because he emanates calm and fun, his sales seem to be nonetheless steady.  Watching bunches of kids swoop delightedly on the bubbles, like excited butterflies, I often feel it is an apt metaphor for the joy and innocence of many events and happenings at the Festival. I did catch some of Buffy St Marie’s set at the Concert Stage. She and her three male band members use the American Indian calling voice in their songs. It was a style that took a little bit of getting used to, but I found it profoundly appealing because it was so earthy and soulful. She has been a star and extremely successful songwriter since the sixties and her songs have been covered by the likes of Janis Joplin, Cher, Roberta Flak, Elvis Presley and Neil Diamond.

She is now 60 and what a powerful, svelte, dynamic and  charismatic woman she is! She looked so gorgeous and funky from a distance at Woodford and here in her close-ups she looks amazing too. But what really hit me from quite a distance was her powerful charisma and earthy integrity as she spoke and sung. Her song “Bury My Heart at Wounded Knee” about corruption and Indian land rights was haunting. Last year Woodford was intense. The cyclone further north created flooding which did a lot of damage to Woodfordia and to their ticket sales which put them in a terrible financial predicament. To read how Woodford accidentally got involved in a sponsorship controversy and how they responded (very well I believe), read this article. To see more 2011-12 Woodford images, go to the photo blog “Yes I can Too” and here is a compilation of images and blogs on Woodford at Squidoo. To read and watch more about Woodford go to their official site or watch a news report from ABC TV on this year’s event. Also if you plan to go next year, there is now a Woodford program app which you can download to your iphone or ipad rather than buy the gorgeous book for $10. Oh and a well known local writer and poet called Archie (Robin Archibald) won the Spirit of Woodford Award for Spoken Word. It was a great story he had worked on for ten months and he deserved to win. Maybe I’ll see you at Woodford next year? 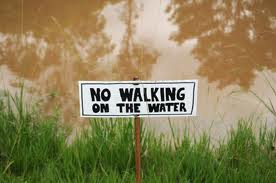