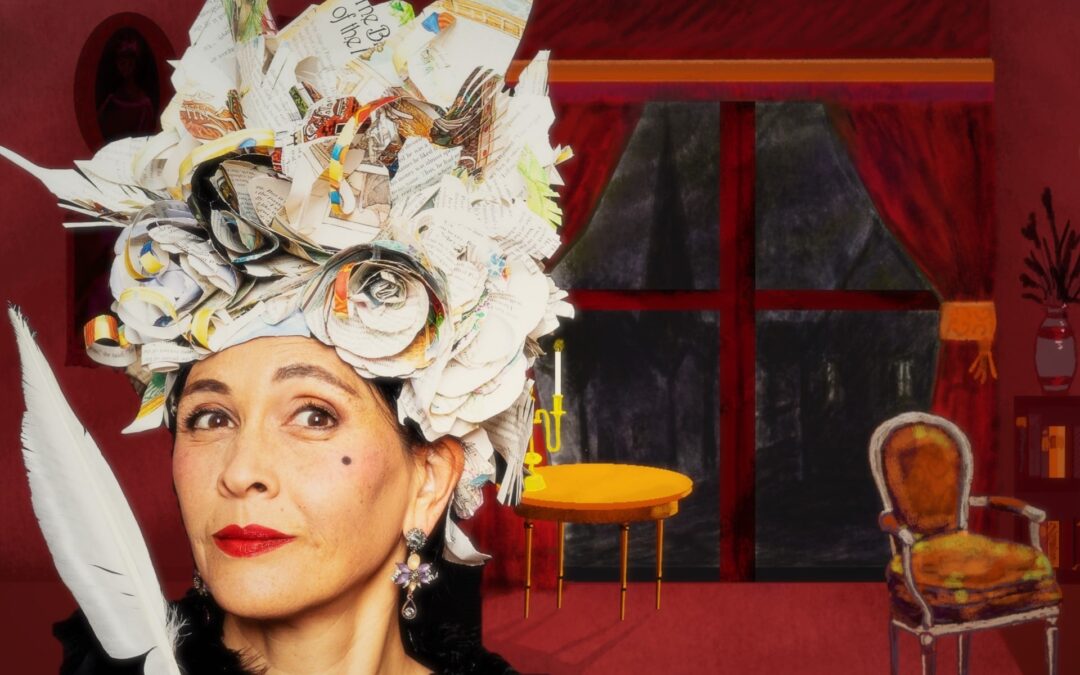 I am fresh with inspiration from my recent trip to Sydney for the live component of the Australian Fairytale Society Conference held on Monday, 14 June. It was absolutely FANTASTIC! The benefits of a live Conference are getting to meet colleagues and aficionados in an intimate setting, so you can make friends and connections, as well as learn from and about each other.

One of my highlights was getting to hear renowned and prolific author, Dr Kate Forsyth whose books I love. She takes much inspiration from fairytales and wrote a PhD on Rapunzel. I first met Kate at the inaugural AFTS Conference in 2014, when we were on the same panel: “Cultural Editing: How Some Fairytales get Lost in the Woods.” I had bought a ticket to go to the Bellingen Writers Festival partly to see Kate as I had a deep sense I needed to talk with her about of ‘Lily and the Bzou’, my version of the ancient French predecessor to ‘Little Red Riding Hood’, sometimes called ‘The Grandmother’s Tale’ or the ‘Path of Needles and Pins’.

Jenni performs ‘Lily and the Bzou’ at the Australian Fairytale Society Conference, Sydney 2021

After my performance, I was able to chat with Kate who strongly encouraged me to make it into a book. I had considered a short story, but not a book. Exciting thought. Jo set up an amazing opportunity for Conference presenters, that we could pitch a story idea to a literary agent via zoom. So the next day, in an audacious mood, I did so. I had exactly NINE minutes and at the end she said, ‘I’m hooked! Send it to me once it’s written!’

This brought up enormous excitement, soon followed by ALL my fears! Leagues of them! Frankly, I’ve been wrestling with them ever since. They are rather hairy, with long, sharp teeth and jump out regularly, from the dark recesses of my psyche, accompanied by all my insecurities around writing and long projects! Nevertheless, it’s a suggestion I am seriously considering. To help me imagine my own work, I’ve started devouring Kate’s exegesis or commentary on her PhD research ‘The Rebirth of Rapunzel: A Mythic Biography of the Maiden in the Tower’. Kate kindly posted me a signed copy which arrived yesterday. 🙂 The sumptuous novel she wrote based on that meticulous research is ‘Bitter Greens’. It is set in the court of Versailles presided over by the Sun King, Louis XIV. I highly recommend! It won a host of international awards.

I also met and clicked with Eliane Davis Morel (pictured above) whose brilliant show, ‘Disenchanted: A Cabaret of Twisted Fairy Tales’ explores the stories of previously sidelined fairy tale characters. It premiered at the Sydney Fringe 2018 and was nominated for Best Cabaret at the Melbourne (Digital) Fringe Festival, 2020. I have introduced Eliane to the owner of the Strumpet Salon in Lismore and hopefully she can bring her show to the Northern Rivers.

I even saw my former classmate, Jane from my Drama Action Centre days in 1990 and 1991, who was singing with the choir who performed for us. The programme was rich with fascinating presentations about the history of fairytales, performances from a wonderful young opera singer and The Moon Catchers, a women’s choir who sang Scottish and English ballads that spoke of faery. We also did some craft, lead by costume designer, Livonne Larkins (pictured below).

Huge thanks to the tiny AFTS crew, lead by Jo Henwood, who did masses of work to put on another really magnificent and inspiring Conference. Jo barely sat down all day, so blessings upon you Jo. May the fairies throw fairy dust on your life and your hard work be repaid threefold in fortune and joy!

Here is a blogpost I wrote about the inaugural Fairy Tale Society Conference in Sydney in 2014, which has links to videos of panel discussions and the keynote by Carmel Bird. 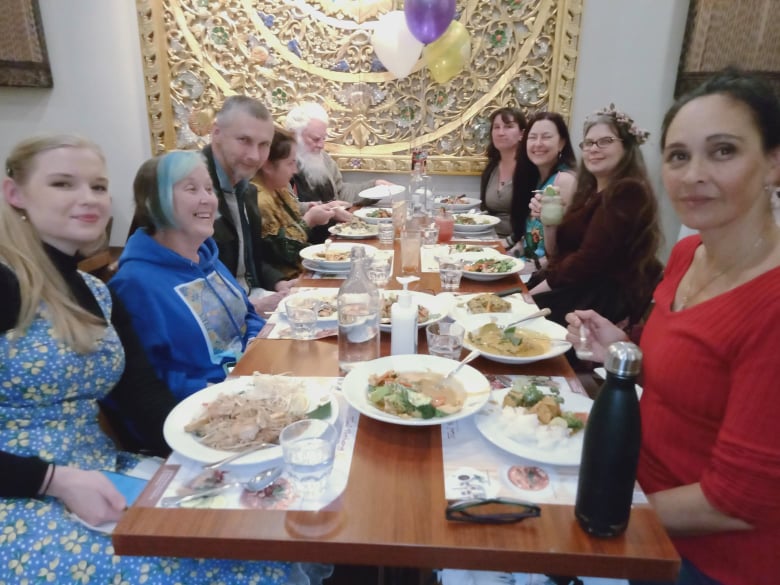 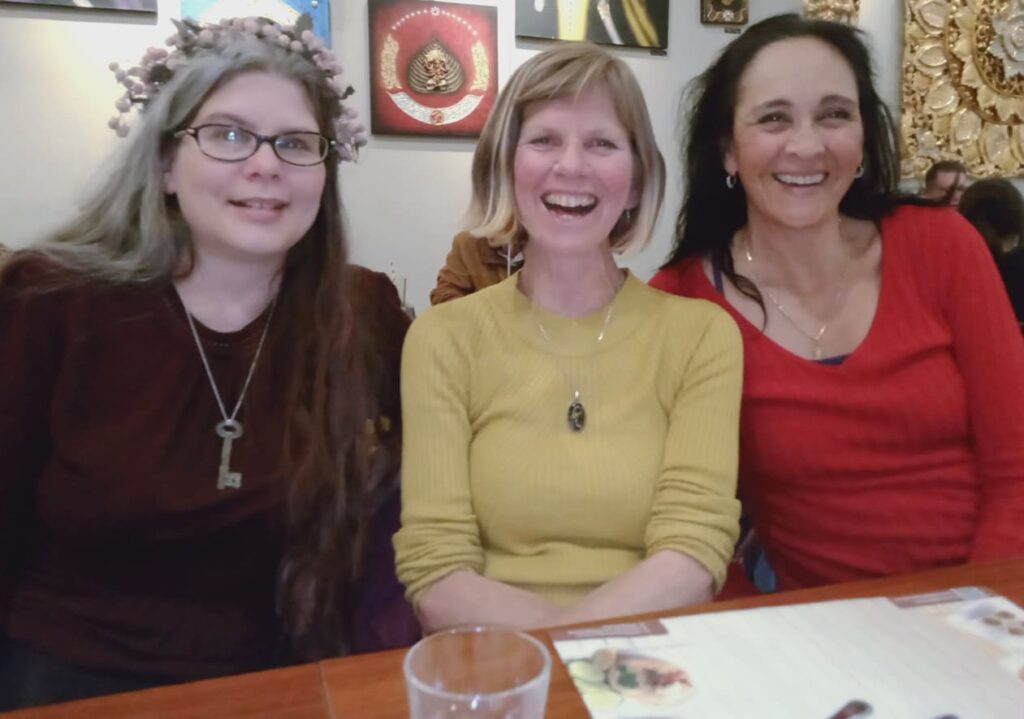 Jenni with glass artist and ASFTS Board member Spike Deane and Eliane Morel. 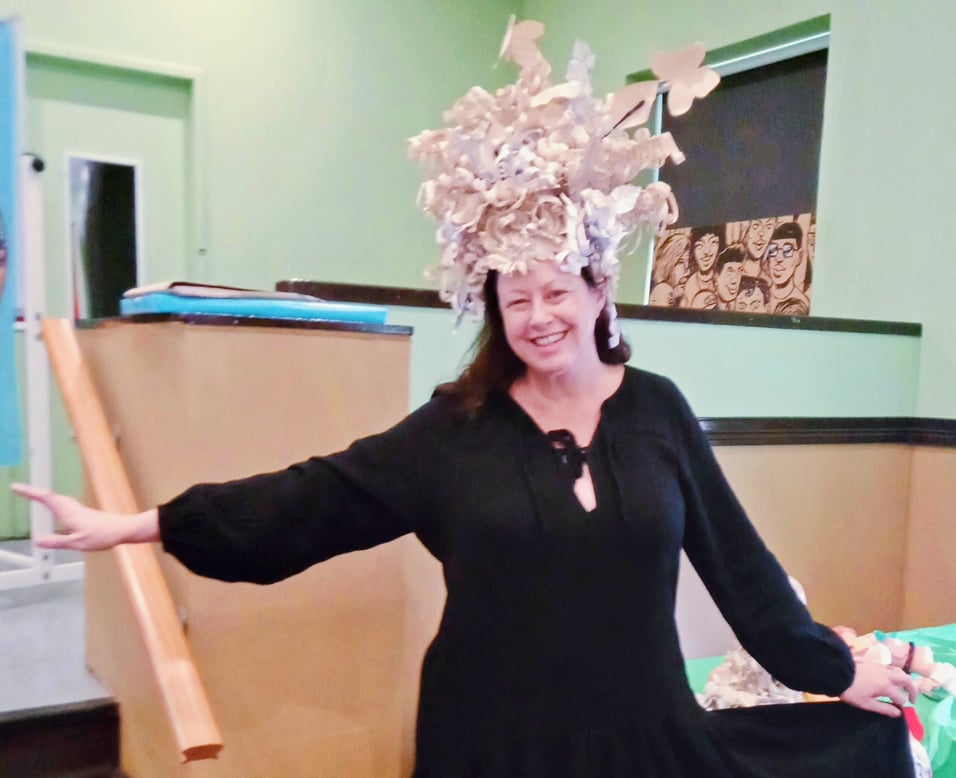 Kate Forsyth graciously models one of Livonne Larkin’s headdresses made in lockdown. Kate had just returned from the Bellingen Writers Festival and was rather tired, but still managed to be fascinating and generous. 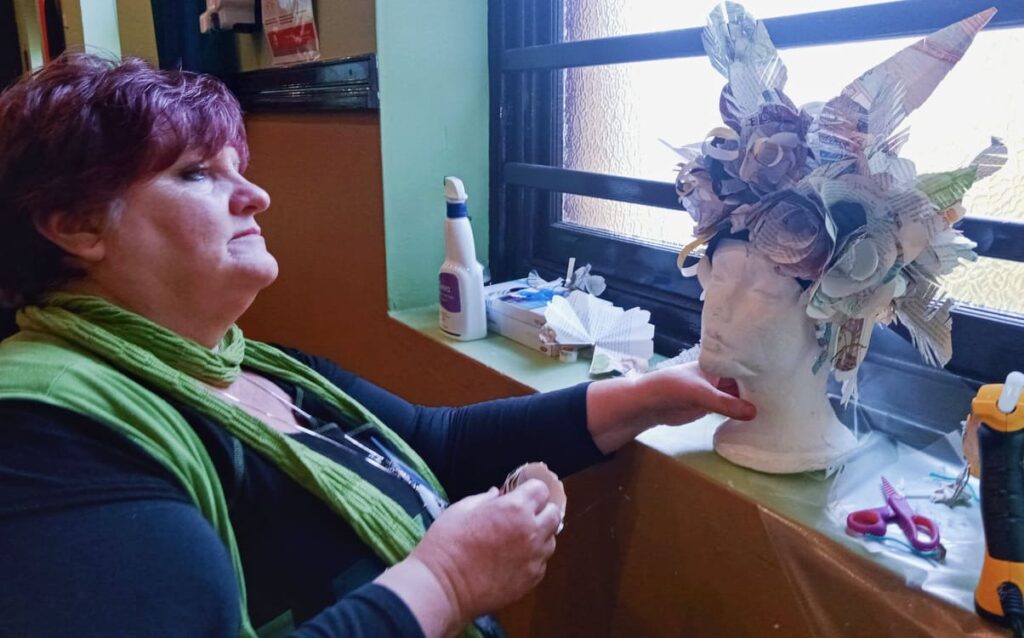 Livonne Larkins pulls together our crafting to make the headdress Liane sports at the top of the page! Voila!