Many years ago I wrote this article about ‘Jack and the Beanstalk’. I was holding off publishing it until I had recorded and/or published my version. However I think this article needs to be released from it’s confines (after eight long years) and perhaps it may generate discussion. Jo Henwood of the recently established Australian Fairytale Society, initiated her genius idea of Fairy Tale Rings (read more and follow links at the blog I wrote about this). They are held nationally every two months. Jack and the Beanstalk is the tale being discussed currently and a reading list was sent around

http://ausfairytalesociety.com.au/forums/topic/jack-and-the-beanstalk-reading-list. So, last night my friend Sandra Frain and I told our storytelling colleagues our versions of ‘Jack and the Beanstalk’. While not radically different, our versions were distinct enough to delight our friends and generate much discussion. I will add a write up of our versions eventually, but meanwhile here is my article. 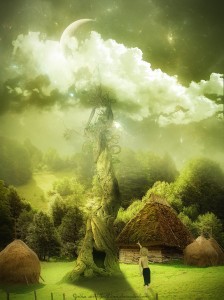 I have to confess: I am a Jack lover. I find him empowering, exciting, magical and delightfully cheeky. However, it hasn’t always been so. Once, like many people, I was suspicious of Jack. He was just a lazy, violent, materialistic, thieving social climber obsessed with phallic symbols, wasn’t he? If so, what kind of a role model is that for a boy or a girl?

Embedded in the folktales and myths that have endured through time, are ancient codes. These codes appeal so strongly to deep places within our souls, that even the most modern children are still drawn very powerfully to them. That is, unless they have been taught, either explicitly or implicitly, that folktales are not good stories. Of course, not all folktales or myths are jewels. Not all literature is worth reading either, but it doesn’t mean we throw the baby out with the bathwater and dismiss all literature, in the way that some people dismiss all folktales.

However know that you may have to kiss a few toad stories as you journey along the road of folktales. The treasures you seek may at first be difficult to recognize, for they may be hiding under the cultural moss of outmoded prejudices or the cobwebs of old fashioned references and ideas. Then, once you have cleared away the moss and the cobwebs, you may need to decode their golden language if you are to fully appreciate their value. No wonder so many of us adults fall along the wayside. Children don’t have these problems. They can instinctively and unconsciously intuit the metaphors, leaving them to simply enjoy a good story.

Giving a historical context on our attitudes towards traditional stories, Joseph Campbell, a world authority on mythology and folktales said,

‘The “monstrous, irrational and unnatural” motifs of folktale and myth are derived from the reservoirs of dream and vision. On the dream level, such images represent the total state of the individual dreaming psyche…but clarified of personal distortions and profounded – by poets, prophets, visionaries-, they become symbolic of the spiritual norm for Man the Microcosm. They are thus phrases from an image-language, expressive of metaphysical, psychological and sociological truth. And in the primitive, oriental, archaic and medieval societies this vocabulary was pondered and more or less understood. Only in the wake of the Enlightenment has it suddenly lost its meaning and been pronounced insane.’ (1)

Bruno Bettleheim in his classic book, “The Uses of Enchantment”, has this to say of Jack and the Beanstalk: 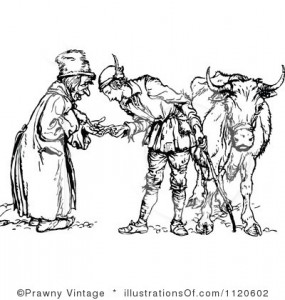 “Important elements of this fairy story appear in many stories all over the world: the seemingly stupid exchange which provides something of magical power: the miraculous seed from which a tree grows that reaches into heaven; the cannabalistic ogre that is outwitted and robbed; the hen or goose that lays the golden eggs; the musical instrument that talks. But their combination into a story which asserts the desirability of social and sexual self-assertion in the pubertal boy, and the foolishness of a mother who belittles this, is what makes Jack and the Beanstalk such a meaningful fairy tale.” (2)

Once I began thinking in these terms, something else clicked into place. I recognized that Jack was descended from a long line of mythic heroes and heroines, who at great risk to themselves, wrest wisdom, wealth and power from Sky Gods who usually, are extremely reluctant to part with these boons. I have a particular passion for one of these heroines -the ancient Sumerian Goddess of Fertility, Inanna. She stole and brought back to Earth the sacred tablets of wisdom, power and wealth, after tricking her Sky God Father, Enki. She was celebrated by her people for it. The ancient Greeks told of Prometheus who stole fire from Zeus. The Aboriginal Rainbow Bird bravely snatched fire from the mouth of the greedy crocodile, to share it with the people. (3) Maui the trickster God, in Maori legend, annoyed his grandmother Mahuika, the Fire Goddess until she threw fire into the trees, so people could rub sticks together and make fire. But Jack’s story is tailor made for the understanding of a Western child. My son’s Kindergarten teacher, an enthusiastic storyteller herself, calls Jack the Robin Hood of the Sky.

Take another look with Jung or Bettleheim’s eyes and you see that Jack is simply the archetypal young boy, needing to jump over his next developmental hurdle. To grow up, he must relinquish the endless supply of mother’s milk and the dreamy, self-indulgent or ‘lazy’ phase of early childhood. This is represented by selling their beloved cow Milky White. He has to stand up for what he believes in, be brave, assert himself to his mother and take action. He has to take initiative in life and start the journey towards manhood. The phallic beanstalk is an emblem of his arising potency, replacing the previous oral stage.

How now to remove from his story the moss and cobwebs: the outmoded values and references? Since folktales can have a powerful effect on children, this is an important surgery to perform. Yet, if you don’t know what you are doing, a little nip and tuck could turn into an extreme makeover with disastrous results. You must always leave the essential elements of the story intact or in your quest to update the tale, you could render it so politically correct that it is left dull, impotent and banal.

The parts I wanted to update in Jack were the rather unequal relationship between the ogre and his wife; the implication that Jack and his mother keep their treasure all for themselves and the idea that Jack is both lazy and a giant killer. So in my version, the giant’s wife becomes ‘the Giantess’, so that she has an identity of her own: she is not merely somebody’s wife. She doesn’t become a Goddess, she just has a little more oomph. She gently bosses the giant around: “Oh you and yer fee fi fo fummin! Just sit down to yer dinner dear.” She reminds the giant to do the washing up and drying up after dinner, which he meekly complies with. However it is also OK to have a disempowered character in a story. They can act as a warning to children of how NOT to be. They may see something tragic in the character and decide not to be like that, but to be more like the hero or heroine.

To help children make more conscious sense of the tale I give them this introduction:

“The giant is like us on the days when we don’t feel like sharing, when we are greedy and thoughtless. Of course it’s all right not to share sometimes, but the giant NEVER wants to share with ANYONE: not his money, not his golden goose and not his music!

Jack’s mother, is that side of us that is fearful, always looks on the dark side of everuytging that happens and is a bit melodramatic.

Now some people say that Jack is lazy, but I disagree. I think Jack was just happy-go-lucky. [For me that is a better way to describe early childhood.] He’s happy when he’s poor, and later he’s happy when he’s rich, but it isn’t money that makes him happy. Because money can help you be comfortable, but it can’t buy happiness. Jack’s happy because of what is in his heart.”

In my version, when the giant falls off the beanstalk and hits the ground, his great body carves a deep hollow in the Earth, the size of a valley. Then, he disappears in a puff of smoke. This, I explain is because he wasn’t the kind of 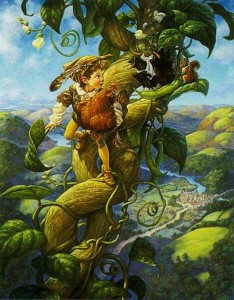 giant that was meant to live on the Earth, he was meant to stay in the Sky. This underscores for the adults listening, as much as for the children, that Jack hasn’t murdered a mortal man, rather he has slain (in self- defence) an archetype. By slaying such a character, Jack is empowered to integrate into his own psyche the positive aspects of the giant: courage, strength and the ability to hold wealth. Because Jack is a hero, he can use these strengths to do good, rather than evil: so in my version, Jack and his mother share their wealth. They also buy a gypsy wagon and travel the world so that others can share in the soulful music of the golden harp, and whenever people ask how they came by the harp, he tells the story of Jack and the Beanstalk.

The Inuit say that a storyteller creates the atmosphere in which wisdom reveals itself. Children are able to imbibe this wisdom very naturally and unconsciously. It is only when we are adult that we want a more conscious and intellectual understanding as well. So please remember, that the inner language of stories is largely Sacred Parents Business. It is not meant to be shared with our children. When the time is right, they will begin to comprehend the hidden meanings and extra dimensions consciously as well as unconsciously.

I hope this article has helped you to see another side to Jack and his Beanstalk. Perhaps you may also be able to see the empowering, exciting, magical and delightfully cheeky side of Jack. I hope that the next time you meet him, rather than shunning him, you’ll carefully remove any moss or cobwebs trailing after him and then invite him to come and play as a welcome guest at your place. But be prepared, as he is sure to bring his many good friends!

(3) Storyteller Eric Maddern has written a picture book called The Rainbow Bird, based on the Aboriginal version from Manyallaluk.