The Winter Solstice and Sacred Fire 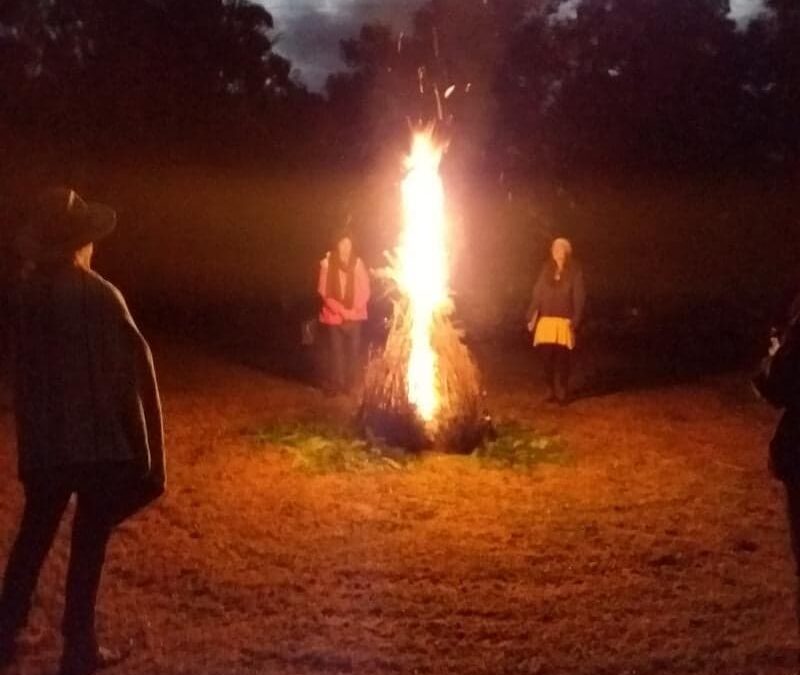 ABOVE: A bower fire by Aunty Pixie Byrnes.

The first gathering was at a private home. When I arrived, the firewood had already been laid and covered in plastic. Aunty Pixie Byrnes, an Aboriginal custodian from Wollumbin, had spent two hours reverently laying the wood for a very particular type of fire that had been taught to her by her grandfathers. Pixie said it usually takes four hours to build, but she had hurried because of the rain! It must have taken her a long time before that, carefully gathering exactly the right twigs and branches. The design was ancient and artful. It was in the shape of of a Bower Bird bower and designed to gradually transform as the fire burned. I have never seen anything like it. It felt like an ancient fire event. Having attended many fire events at Woodford Folk Festival, this was deeply evocative for me. Aunty Pixie let us know how to approach the fire and what was appropriate to share about its sacred meaning. As the fire burned and transformed again and again, I resisted taking photos. It was very tempting because it was so amazing, but I wanted to be present and respectful as I witnessed something so special. Luckily Pixie took this one! Together we shared poems, a few songs, a beautiful symbolic movement, and I read a story by Starhawk, The Rebirth of the Sun. It’s from ‘Circle Round’, a book for families that she co-wrote. The gathering was hosted by Megan of Byron Reclaiming, of which I am a member.

I resonate with what Megan wrote:

Thank you Aunty Pixie Byrnes for a powerful, magical and healing Bowerbird Fire. The Bower in my experience, is a place of protection, support, nourishment, healing and deep love. What a delicious feast we had afterwards! Thank you to everyone who circled around the fire in honour of the Land for Winter Solstice. Fire is sacred

The second event was The Lismore Lantern Parade, which I share in the next blog.